1-800-659-3607
Testimonials
Thank you so much for sending my order so quickly. I still can't believe I received it ony 2 days after I ordered it... I will definitely be ordering from you again.
-T. Wright,
Fort Smith, AR
ARTURO GATTI 28 fights on 12 boxing DVDs

CONTACT US
HOME PAGE
TRILOGY DVDS
POKER
FREE SHIPPING
SPECIAL DVD SETS
PICK A FIGHT
BOXING SCHEDULE
PAY PER VIEW BOXING
(Ratings are to compare sets on this web site only. You cannot compare ratings from one site to another because some sites are not honest and rate their sets higher than they should be.)
Price $17.95
ITEM # 1240p
Price $180.00
without artwork on DVDs
with artwork on DVDs + $17
ITEM # 1240 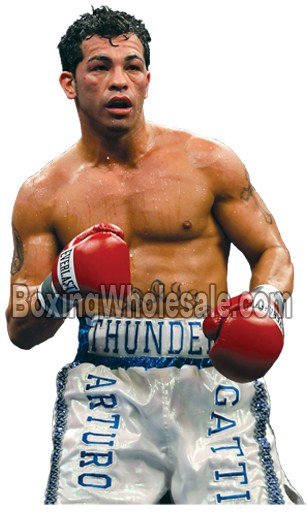 Arturo Gatti (April 15, 1972 – July 11, 2009) was an Italian Canadian professional boxer who competed from 1991 to 2007. Nicknamed “Thunder”, Gatti was known for his heart and bravery in the ring, and also carried exceptional punching power.

A two weight world champion, Gatti held the IBF junior lightweight title from 1995 to 1998, and the WBC super lightweight title from 2004 to 2005. He also participated in The Ring magazine’s Fight of the Year a total of four times (1997, 1998, 2002, and 2003). He announced his retirement on July 14, 2007. On December 10, 2012, Gatti was posthumously inducted into the International Boxing Hall of Fame, in his first year of eligibility, and becoming the tenth Canadian boxer to be inducted.

Born in Cassino, Italy, from Italian parents, and raised in Latium, in the region of central western Italy, and then in Montreal, Quebec, Canada, Gatti relocated to Jersey City, New Jersey as a teenager. He returned to Montreal after retiring from boxing to work in real estate.

Arturo Gatti was a member of the Canadian National team, and was training to represent Canada at the 1992 Summer Games, but at age 19 (in 1991), he decided to turn pro instead. He began boxing professionally on the night of November 17, 1992.

His next fight, on March 24, 1993, was his first fight abroad, where he visited Amsterdam, Netherlands and knocked out Plawn Goutchev in round one.

In 1994, he beat Leon Bostic, and followed through with a round 1 knockout over Pete Taliaferro to win the USBA Super Featherweight title. He retained the title against Richard Salazar and former world champion Jose Sanabria.

He only had two fights in 1996, once defending his world title. His title defense, at Madison Square Garden against Dominican Wilson Rodriguez was the first of three Gatti fights in a row to be named a candidate for “Fight of the Year” by Ring Magazine. Dropped in round two and with his right eye closing fast, Gatti knocked Rodriguez down in round six with a left hook to the body before finishing him off in round six to retain the title.

In 1997, he again won a points victory over Patterson, but this time by a larger margin (118-108, 117-109, 116-110). He then scored a technical knockout over former world champion Calvin Grove in the seventh round of a non-title affair. Then came his defense against former world champion Gabriel Ruelas, which was also named “Fight of the Year” by Ring Magazine. Rocked by a left uppercut in the fourth, Gatti absorbed more than 15 consecutive punches before being saved by the bell. In the fifth, he connected on a left hook to knock Ruelas out.

To the lightweight division

After that fight, Gatti relinquished the world title, going up in weight to the lightweight division. However 1998 was a bad year for Gatti, as he lost all three of his fights that year. He lost by a technical knockout in round eight to Angel Manfredy, and then lost a pair of close 10 round decisions to Ivan Robinson, the first by split decision, the second by unanimous.