1-800-659-3607
Testimonials
I appreciate the service that I received from you guys... I found a new place to shop for my boxing fights. Thank you very much!!!
M. Grant,
Billings, MT
VITALI KLITSCHKO 37 fights on 12 boxing DVDs

CONTACT US
HOME PAGE
TRILOGY DVDS
POKER
FREE SHIPPING
SPECIAL DVD SETS
PICK A FIGHT
BOXING SCHEDULE
PAY PER VIEW BOXING
(Ratings are to compare sets on this web site only. You cannot compare ratings from one site to another because some sites are not honest and rate their sets higher than they should be.)
Price $17.95
ITEM # 1200p
Price $200.00
without artwork on DVDs
with artwork on DVDs + $20
ITEM # 1200 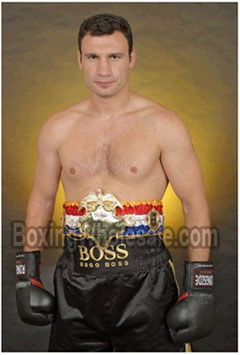 Vitali Volodymyrovych Klitschko (born July 19, 1971) is a Ukranian politician and former professional boxer. He currently serves as Mayor of Kiev and head of the Kiev City State Administration, having held both offices since June 2014. Klitschko is a former leader of the Petro Poroshenko Bloc and a former Member of the Ukrainian Parliament. He became actively involved in Ukranian politics in 2005 and combined this with his professional boxing career until his retirement from the sport in mid-December 2013.

As a boxer, Klitschko is a three time world heavyweight champion and is the eighth longest reigning heavyweight champion of all time. He held the WBO title from 1999 to 2000; the Ring magazine title from 2004 to 2005; and the WBC title twice, from 2004 to 2005 and from 2008 to 2013. Standing at 2.02 meters (6 feet 7 inches), Klitschko was renowned for having exceptional ring dominance. With an 87.23% knockout percentage, he holds one of the best knockout-to-fight ratios of any champion in heavyweight boxing history, while also possessing a highly durable chin. His two losses came via a shoulder injury and a deep cut above his eye, both of which were recorded as stoppages but not outright knockouts; in both fights he was leading on the judges’ scorecards.

Klitschko is the only heavyweight world champion to have never been knocked down in any fight. Alongside George Foreman he is the only heavyweight boxer in history to defend a world title after turning 40. Being the first professional boxing world champion to hold a PhD degree, and in reference to his punching power, Klitschko’s nickname was “Dr. Ironfist”. His younger brother, Wladimir, is also a former heavyweight champion who held the unified WBA (Super), IBF, WBO, IBO, The Ring, and lineal heavyweight titles. From 2006 until 2015, Vitali and Waldimir dominated heavyweight boxing, a period typically known as the “Klitschko Era” of the division.

Klitschko formally began his political career in 2006 when he placed second in the Kiev mayoral race. In 2010, he founded the party Ukrainian Democratic Alliance for Reform (UDAR) and was elected into parliament for this party in 2012. He was a leading figure in the 2013-2014 Euromaidan protest, and he announced his possible candidacy for the Ukrainian presidency but later withdrew and endorsed Petro Poroshenko. He was elected Mayor of Kiev on May 25, 2014. Klitschko headed the election list of the winner of the 2014 Ukrainian parliamentary election, the Petro Poroshenko Bloc, but he gave up his parliamentary seat to stay on as Mayor of Kiev. On August 28, 2015 the UDAR party merged into Petro Poroshenko Bloc. Klitschko thus became the new party leader. Klitschko was reelected as mayor on November 15, 2015.

Klitschko faced South African Corrie Sanders on April 24, 2004 for the WBC heavyweight championship and The Ring belts that had been vacated by Lewis. Sanders had stopped younger brother Wladimir in the second round (TKO) on March 8, 2003. Klitschko was rocked in round one by Sanders, but by using upper body movement and accurate punching he broke down Sanders, forcing referee Jon Schorle to stop the bout Vitali landed 60% of his power punches.

Klitschko’s first WBC title defense was against British boxer Danny Williams. Williams had become suddenly marketable from a KO over Mike Tyson in round 4. Klitschko scored a technical knockout against Williams in 8 rounds on December 11, 2004, while wearing an orange cloth to show support for the Ukrainian presidential opposition movement. Klitschko knocked Williams down in the 1st, 3rd, 7th, and 8th rounds before the fight was stopped. Imediately afterward, Klitschko dedicated his victory to democracy in his native Ukraine and also to the Ukrainian presidential candidate Viktor Yushchenko, whom he supported in December 26, 2004, election revote.

On November 9, 2005, Klitschko announced his retirement from professional boxing and vacated his title. He had been training to fight Hasim Rahman, however, nine days before the fight, he injured his leg while sparring.