This set comes with full professional motion menus with music, chaptered rounds, complete set in chronological order on 15 high quality DVDs. Includes premium cases and artwork printed on the DVDs.
Orders are carefully packaged in boxes with bubble wrap and shipped out within 24 hours by priority mail (2-3 days). Guaranteed.
Our competitors sell sets in paper sleeves without cases and without artwork printed on the DVDs. They do not make their own custom menus but illegally copy our menus. Please reward the site that spends all the hard time to make these beautiful sets and not the sites that just copy our work.

1-800-659-3607
Testimonials
I have just received my order from your company and couldn't have been happier. The artwork on the DVDs was excellent and having the fights printed on each disc helps greatly. I purchased from the other company before and can definitely say that yours is the only company I'll be doing business with from now on. Keep up the good work and look forward to doing a lot of business with you in the future. Oh and by the way, getting the fights delivered in just a few days was a big plus.
D. Leventon,
Brooklyn, NY
SUGAR RAY LEONARD 36 fights on 15 boxing DVDs

CONTACT US
HOME PAGE
TRILOGY DVDS
POKER
FREE SHIPPING
SPECIAL DVD SETS
PICK A FIGHT
BOXING SCHEDULE
PAY PER VIEW BOXING
(Ratings are to compare sets on this web site only. You cannot compare ratings from one site to another because some sites are not honest and rate their sets higher than they should be.)
Price $19.95
ITEM # 1190p
Price $200.00
without artwork on DVDs
with artwork on DVDs + $20
ITEM # 1190

Ray Charles Leonard (born May 17, 1956), best known as “Sugar” Ray Leonard, is an American former professional boxer, motivational speaker, and occasional actor. Often regarded as one of the greatest boxers of all time, he competed from 1977 to 1997, winning world titles in five weight divisions; the lineal championship in three weight divisions; as well as undisputed welterweight title. Leonard was part of “The Fabulous Four”, a group of boxers who all fought each other throughout the 1980s, consisting of himself, Roberto Duran, Thomas Hearns and Marvin Hagler.

“The Fabulous Four” created a wave of popularity in the lower weight classes that kept boxing relevant in the post-Muhammad Ali era, during which Leonard defeated future fellow International Boxing Hall of Fame inductees Hearns, Duran, Hagler, and Wilfred Benitez. Leonard was also the first boxer to earn more than $100 million in purses, and was named “Boxer of the Decade” in the 1980s. The Ring magazine named him Fighter of the Year in 1979 and 1981, while the Boxing Writers Association of America (BWAA) named him Fighter of the Year in 1976, 1979, 1981.

When Leonard decided to turn professional, Janks Morton introduced him to Mike Trainer, a friend of his who was an attorney. Trainer talked 24 of his friends and clients into underwriting Leonard’s career with an investment of $21,000 to be repaid within four years at 8% interest. Trainer then made Leonard the sole stockholder in Sugar Ray Leonard, Inc. Angelo Dundee, Muhammad Ali’s trainer, was brought in to be Leonard’s trainer and manager. Many of the people being considered wanted absolute control and a cut somewhere near the manager’s traditional 33%. Dundee had a different proposition. Although he would prescribe the training procedures, he would leave the day-to-day work to Dave Jacobs and Janks Morton. He would also choose Leonard’s opponents. For his services, Dundee would get 15% of Leonard’s purse.

Leonard made his professional debut on February 5, 1977 before a crowd of 10,270 at the Civic Center in Baltimore. He was paid $40,044 for the fight. His opponent was Luis “The Bull” Vega, whom he defeated by a six round unanimous decision. After the fight, Leonard paid back his $21,000 loan to the investors.

In his fourteenth professional fight, Leonard fought his first world ranked opponent, Floyd Mayweather, who was ranked seventeenth. The fight took place on September 9, 1978. Leonard won by a tenth round knockout. A month later, Leonard defeated his old amateur nemesis Randy Shields by a ten round unanimous decision.

On August 12, 1979, Leonard knocked out Pete Ranzany in four rounds to win the NABF Welterweight Championship. The following month, he made his first title defense against Andy Price. Many felt that Price would give Leonard a tough fight, but Leonard took him out in the first round, advancing his record to 25-0 with 16 knockouts.

Leonard fought Wilfred Benitez for the WBC Welterweight Championship on November 30, 1979, at Caesar’s Palace in Las Vegas, Nevada. There was a capacity crowd of about 4,600. Leonard received $1 million and Benitez, a two division champion with a record of 38-0-1, received $1.2 million.

It was a highly competitive and tactical battle. In the first round, Leonard rocked Benitez with a left hook that came off a jab and right cross. Late in the third, Leonard dropped Benitez on the seat of his pants with a stiff left jab. More embarrassed than hurt, Benitez got up quickly. 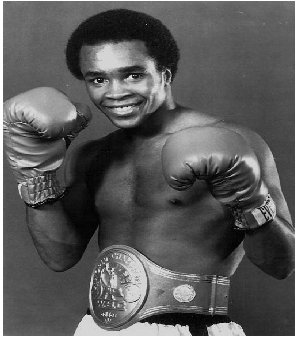