This set comes with full professional motion menus with music, chaptered rounds, complete set in chronological order on 4 high quality DVDs. Includes premium cases and artwork printed on the DVDs.
Orders are carefully packaged in boxes with bubble wrap and shipped out within 24 hours by priority mail (2-3 days). Guaranteed.
Our competitors sell sets in paper sleeves without cases and without artwork printed on the DVDs. They do not make their own custom menus but illegally copy our menus. Please reward the site that spends all the hard time to make these beautiful sets and not the sites that just copy our work.

1-800-659-3607
Testimonials
Thank you very much for your fast friendly and efficient response. I would not hesitate to do more business with your company.
T. Craig,
St. George, UT
JOHN MUGABI 22 fights on 4 boxing DVDs

CONTACT US
HOME PAGE
TRILOGY DVDS
POKER
FREE SHIPPING
SPECIAL DVD SETS
PICK A FIGHT
BOXING SCHEDULE
PAY PER VIEW BOXING
(Ratings are to compare sets on this web site only. You cannot compare ratings from one site to another because some sites are not honest and rate their sets higher than they should be.)
Price $17.95
ITEM # 1145p
Price $80.00
without artwork on DVDs
with artwork on DVDs + $17
ITEM # 1145 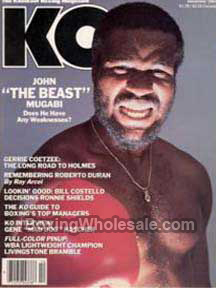 John Mugabi (born March 4, 1960) is a Ugandan former professional boxer who competed from 1980 to 1991, and 1996 to 1999. He held the WBC super-welterweight title from 1989 to 1990, and challenged twice for world titles at middleweight, including the undisputed championship. Mugabi was part of an exceptionally talented group of light-middleweights and middleweights during a “golden era” of the 1980 which included Marvin Hagler, Sugar Ray Leonard, Thomas Hearns, Wilfred Benitez, Davey Moore, and Roberto Duran. As an amateur, Mugabi won a silver medal in the welterweight division at the 1980 Summer Olympics, and was the only medallist for Uganda at the event.

Representing Uganda, Mugabi was the Silver medallist at the 1980 Olympic Games in Moscow, boxing in the Welterweight (67 kg) class. Mugabi lost to Andres Aldama of Cuba in the final.

He was also a silver medallist at the 1976 Junior World Championships, losing to Herol Graham in the final. Additionally, Mugabi won a bronze medal at the 1978 All-Africa Games in the light-welterweight division.

John Mugabi started as a professional on December 5, 1980 by knocking out Oemer Karadenis in round one in Kampala. Soon after that win, Mugabi moved to London where he became acquainted with boxing promoter Mickey Duff, an expert in boxer marketing who landed Mugabi various fights in England and built his reputation there. Mugabi won eight fights in Europe. Searching for more formidable foes, John moved to Florida where he became a favorite of American TV networks with his sensational knockouts of contenders such as Curtis Ramsey, Gary Guiden, former world champion Eddie Gazo, Curtis Parker, Frank The Animal Fletcher, Nino Gonzalez and Earl Hargrove through a display of tenacity and ferociousness. ‘The Beast’ as he would become known (for his ferocious attacks and untamable style, bashing his prey with overhand rights and wild left hooks) was able to fluctuate his weight between middleweight and junior middleweight. Some people lose effectiveness by changing weight classes, but not Mugabi. He was able to knock out every opponent he faced to that point of his career.

Mugabi’s first victory of note came on May 2, 1982, when he took on veteran Curtis Ramsey. It was Mugabi’s 11th bout and he took care of the American in two rounds in Atlantic City, New Jersey. 1983 was a busy calendar year for the Beast. In that year he took on Gary Guiden, who had just come off of a Championship fight against Davey Moore; Mugabi stopped him in three. Many started speculating about Mugabi’s role in the future of the Junior Middleweight and Middleweight divisions. The fact Mugabi easily made the weight at both divisions made him more intriguing than most prospects. Nicaraguan, Eddie Gazo, a former WBA Junior Middleweight Champion provided Mugabi with his first real test. Gazo went rounds with Mugabi, but ‘The Beast’ ended things the way he always did. Mugabi was simply stronger and faster tactically overwhelming the busier Gazo. In the same year, Mugabi took on Curtis Parker a former Pennsylvania Golden Gloves amateur champion. The ‘meeting’ with Curtis Parker was on national television. Parker was an established fighter, but Mugabi’s destruction of Parker was savage. It was the first time that Parker had lost a bout by knockout.

Because of his ability to fight both at junior middleweight and middleweight, fans began to talk of the possibility of him challenging either world light middleweight champion Hearns or world middleweight champion Hagler. Despite Mugabi being a mandatory contender for some time, a Hearns – Mugabi title match never materialized, as Hearns elected to move to Middleweight to challenge Marvelous Marvin Hagler. Considering his streak and Hagler’s tough battle with Hearns on April 15, 1985, some felt Mugabi had a shot at doing what eleven men before him could not: wresting Hagler’s undisputed world middleweight title from him. On March 10, 1986 Marvin ‘Marvelous’ Hagler rose to a very stiff challenge. A young, undefeated powerhouse was destroying every opponent in his path. John ‘The Beast’ Mugabi had won all of his contests by knockout, many spectacular, many in the first few rounds of the fight.