This set comes with full professional motion menus with music, chaptered rounds, complete set in chronological order on 39 high quality DVDs. Includes premium cases and artwork printed on the DVDs.
Orders are carefully packaged in boxes with bubble wrap and shipped out within 24 hours by priority mail (2-3 days). Guaranteed.
Our competitors sell sets in paper sleeves without cases and without artwork printed on the DVDs. They do not make their own custom menus but illegally copy our menus. Please reward the site that spends all the hard time to make these beautiful sets and not the sites that just copy our work.

1-800-659-3607
Testimonials
Thank you so much for sending my order so quickly. I still can't believe I received it ony 2 days after I ordered it... I will definitely be ordering from you again.
-T. Wright,
Fort Smith, AR
MANNY PACQUIAO 44 fights on 37 boxing DVDs 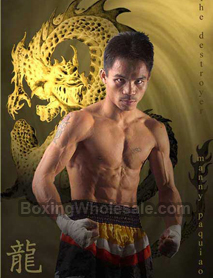 Manny Pacquiao was named "Fighter of the Decade" for the 2000s by the Boxing Writers Association of America (BWAA), World Boxing Council (WBC), and World Boxing Organization (WBO). In 2006, 2008, and 2009, he was awarded Ring magazine, ESPN and BWAA's Fighter of the Year, and in 2009 and 2011 he won the Best Fighter ESPY Award. BoxRec ranks him as the greatest Asian fighter of all time. In 2015, Pacquiao ranked No. 2 on ESPN's list of top pound for pound boxers of the past 25 years and he ranks No. 5 in BoxRec's ranking of the greatest pound for pound boxers of all time.

Pacquiao became the first Filipino Olympic non-participant to be Team Philippines' flag-bearer during the August 8 opening ceremonies of the 2008 Summer Olympics at the Beijing National Stadium. Swimmer Miguel Molina, 2005 Southeast Asian Games' Best Male Athlete, yielded the honor to Pacquiao, upon the request of President Gloria Macapagal-Arroo to the request of President Gloria Macapagal-Arroyo to the national sports officials on the Philipines at the 2008 Summer Olympics. He had the opportunity to compete in the 2016 Summer Olympics in Brazil, when professional boxers under the age of 40 were allowed to compete in the games for the first time. However Pacquiao, decided not to compete.

Forbes listed Pacquiao as the world's equal sixth highest paid athlete, with a total of $40 million from the second half of 2008 to the first half of 2009. Tied with him on the sixth spot was NA player LeBron James and golfer Phil Mickelson. Pacquiao was again included in Forbes' list of highest paid athletes from the second half of 2009 to the first half of 2020; he was ranked eighth with and income of $42 million. Pacquiao also won the 2009 ESPY Awards for the Best Fighter category, beating fellow boxer Shane Mosley and Brazilian mixed martial arts fighters Lyoto Machida and Anderson Silva. ESPN Magazine reported that Pacquiao was one of the two top earning athletes for 2010, alongside American Major League Baseball player Alex Rodriguez. According to the magazine's annual salary report of athletes, Pacquiao earned $32 million (approximately 1.28 billion) for his two 2010 boxing matches against Clottey and Margarito.