Sugar Ray Robinson 20 Career Boxing Fights On 8 DVDs With  Motion Menus
Overall Quality- 8-9.5 with only one 7

This set comes with full professional motion menus with music, chaptered rounds, complete set in chronological order on 8 high quality DVDs. Includes premium cases and artwork printed on the DVDs.
Orders are carefully packaged in boxes with bubble wrap and shipped out within 24 hours by priority mail (2-3 days). Guaranteed.
Our competitors sell sets in paper sleeves without cases and without artwork printed on the DVDs. They do not make their own custom menus but illegally copy our menus. Please reward the site that spends all the hard time to make these beautiful sets and not the sites that just copy our work.

CONTACT US
HOME PAGE
TRILOGY DVDS
POKER
FREE SHIPPING
SPECIAL DVD SETS
PICK A FIGHT
BOXING SCHEDULE
PAY PER VIEW BOXING
(Ratings are to compare sets on this web site only. You cannot compare ratings from one site to another because some sites are not honest and rate their sets higher than they should be.)
Price $17.95
ITEM # 1130p
Price $140.00
without artwork on DVDs
with artwork on DVDs + $17
ITEM # 1130 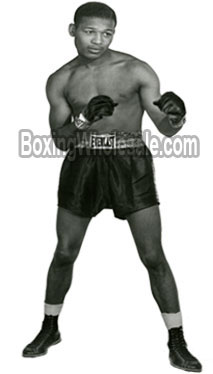 Sugar Ray Robinson (born Walker Smith Jr.; May 3, 1921 - April 12, 1989) was an American professional boxer. Frequently cited as the greatest boxer of all time.

In 1942, Robinson knocked out Fritzie Zivic in the tenth round in a January rematch. The knockout loss was only the second of Zivic’s career in more than 150 fights. Robinson knocked him down in the ninth and tenth rounds before the referee stopped the fight. Zivic and his corner protested the stoppage; James P. Dawson of The New York Times stated “they were criticizing a humane act. The battle had been a slaughter, for want of a more delicate word.” Robinson then won four consecutive bouts by knockout, before defeating Servo in a controversial split decision in their May rematch. After winning three more fights, Robinson faced Jake LaMotta, who would become one of his more prominent rivals, for the first time in October. He defeated LaMotta via unanimous decision, although he failed to get Jake down. Robinson weighed 145 lb (66 kg) compared to 157.5 for LaMotta, but he was able to control the fight from the outside for the entire bout, and actually landed the harder punches during the fight. Robinson then won four more fights, including two against Izzy Jannazzo, from October 19 to December 14. For his performances, Robinson was named “Fighter of the Year”. He finished 1942 with a total of 14 wins and no losses.

Robinson built a record of 40-0 before losing for the first time to LaMotta in a 10 round re-match. LaMotta, who had a 16 lb (7.3 kg) weight advantage over Robinson, knocked Robinson out of the ring in the eighth round, and won the fight by decision. The fight took place in Robinson’s former hometown of Detroit, and attracted a record crowd. After being controlled by Robinson in the early portions of the fight, LaMotta came back to take control in the later rounds. After winning the third LaMotta fight less than three weeks later, Robinson then defeated his childhood idol: former champion Henry Armstrong. Robinson fought Armstrong only because Armstrong was in need of money. By now Armstrong was an old fighter, and Robinson later stated that he carried Armstrong.

On February 27, 1943, Robinson was inducted into the United States Army, where he was again referred to as Walker Smith. Robinson had a 15 month military career. Robinson served with Joe Louis, and the pair went on tours where they performed exhibition bouts in front of US troops. Robinson got into trouble several times while in the military. He argued with superiors who he felt were discriminatory against him, and refused to fight exhibitions when he was told African American soldiers were not allowed to watch them. In late March, 1944, Robinson was stationed at Fort Hamilton in Brooklyn, waiting to ship out to Europe, where he was scheduled to perform more exhibition matches. But on March 29, Robinson disappeared from his barracks. When he woke up on April 5 in Fort Jay Hospital on Governor’s Island, he had missed his sailing for Europe and was under suspicion of deserting. He himself reported falling down the stairs in his barracks on the 29th, but said that he had complete amnesia, and he could not remember any events from that moment until the 5th. According to his file, a stranger had found him in the street on April 1, and helped him to a hospital. In his examination report, a doctor at Fort Jay concluded that Robinson’s version of events was sincere. He was examined by military authorities, who claimed he suffered from a mental deficiency. Robinson was granted an honorable discharge on June 3, 1944. He later wrote that unfair press coverage of the incident had “branded” him as a “deserter”. Robinson maintained his close friendship with Louis from their time in military service, and the two went into business together after the war. They planned to start a liquor distribution business in New York City, but were denied a license due to their race.