CONTACT US
HOME PAGE
TRILOGY DVDS
POKER
FREE SHIPPING
SPECIAL DVD SETS
PICK A FIGHT
BOXING SCHEDULE
PAY PER VIEW BOXING
This set comes with full professional motion menus with music, chaptered rounds, complete set in chronological order on 14 high quality DVDs. Includes premium cases and artwork printed on the DVDs.
Orders are carefully packaged in boxes with bubble wrap and shipped out within 24 hours by priority mail (2-3 days). Guaranteed.
Our competitors sell sets in paper sleeves without cases and without artwork printed on the DVDs. They do not make their own custom menus but illegally copy our menus. Please reward the site that spends all the hard time to make these beautiful sets and not the sites that just copy our work.
(Ratings are to compare sets on this web site only. You cannot compare ratings from one site to another because some sites are not honest and rate their sets higher than they should be.)
Price $17.95
ITEM # 1120p
Price $240.00
without artwork on DVDs
with artwork on DVDs + $21
ITEM # 1120 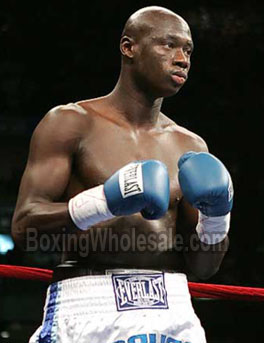 Tarver became a mainstream celebrity after his rematch win over Jones, making appearances at late-night shows, appearing on the cover of both Ring and KO Magazine, being spotted by television cameras as a spectator at various boxing fights, and co-hosting ESPN’s “Friday Night Fights” for one telecast.

Tarver vs Johnson I & II

Later in 2004, the WBC decided to strip Tarver of the world title after he decided against fighting their mandatory challenger, instead choosing to fight IBF title holder Glen Johnson December 18 in Temecula, California; Tarver had already been removed as Super Champion by the WBA in their July rankings. Interestingly, Johnson himself had been stripped of his IBF title before the bout with Tarver for not fighting his mandatory challenger. Both fighters were celebrated for their decision to fight each other rather than bow to the pressure from what has become known as “The Alphabet Soup” sanctioning bodies (WBC, WBA, WBO, and IBF).

Tarver, considered a favorite to win the fight, suffered an upset loss to Johnson by way of a split decision in a fight that he did not appear to be in top shape for. Tarver avenged the loss six months later with a unanimous decision, out-boxing and out-working the aggressive Johnson at the FedEx Forum in Memphis, Tennessee to regain The Ring championship.

In their third fight, Tarver won a unanimous decision over Roy Jones Jr. on October 1, 2005 in Tampa, Florida, almost knocking Jones down in the 11th round but also finding himself in trouble at times during the fight.

On June 10, 2006, Tarver faced former undisputed world middleweight champion Bernard Hopkins for Tarver’s The Ring title at The Boardwalk Hall in Atlantic City, New Jersey. Hopkins, a 3-to-1 underdog, dominated the fight, outboxing Tarver to win a unanimous decision. The fight was scored 118-109 by all three judges. Tarver was knocked down in the 5th round. As a result of a clause in the fight contract, Tarver was forced to pay $250,000 to a charity of Hopkins’ choice since he did not knock Hopkins out before the fifth round. Tarver’s record would now stand at 24 wins and 4 losses, with 18 wins coming by way of knockout.

Return to the ring

Tarver returned to the ring nearly one year after his loss to Hopkins, defeating Albanian fighter Elvir Muriqi on June 9, 2007 by way of a majority decision. In his next fight, held at Foxwoods Resort Casino on December 1, 2007, Tarver registered a win over Danny Santiago by way of a 4th round TKO.

Tarver then regained the IBF title by outpointing Clinton woods.

Tarver vs Dawson I & II

On October 11, 2008, Tarver faced rising star Chad Dawson for Tarver’s IBF title. The fight took place at Palms Casino in Las Vegas. Tarver lost the fight via unanimous decision, with wide margins of 118-109 and 117-110 (twice). The outcome was not disputed.