1-800-659-3607
Testimonials
I would like to send my appreciation to all involved for tracking down my order. I certainly can say you do exceed your goal for superior customer service. Outstanding response from your staff.
D. James
Lakeland, FL
FELIX TRINIDAD 33 fights on 12 boxing DVDs

CONTACT US
HOME PAGE
TRILOGY DVDS
POKER
FREE SHIPPING
SPECIAL DVD SETS
PICK A FIGHT
BOXING SCHEDULE
PAY PER VIEW BOXING
(Ratings are to compare sets on this web site only. You cannot compare ratings from one site to another because some sites are not honest and rate their sets higher than they should be.)
Price $19.95
ITEM # 1110p
Price $199.00
without artwork on DVDs
with artwork on DVDs + $19
ITEM # 1110 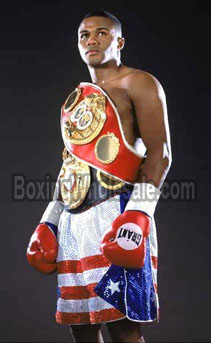 On September 17, 1994, Trinidad traveled to the MGM Grand for a second straight fight to compete in a title defense against Yori Boy Campas, who had a record of 56-0. In the second round Campas scored a knockdown, the second knockdown in Trinidad’s career. Following this Trinidad exchanged several combinations, injuring Campas’ face and breaking his nose. In the fourth round, the referee stopped the fight, the first defeat in Campas’ career.

Trinidad’s fourth fight outside Puerto Rico or the United states took place on Estadio de Beisbol in Monterey, Mexico. Trinidad was scheduled to defend his title against the undefeated Oba Carr. In the second round, Carr scored a knockdown, which was the product of a quick right hand punch. Trinidad continued the fight and pursued the challenger, who displayed a quick pace throughout the fight. In the fourth round Trinidad connected a solid punch that injured Carr, and in the eighth he scored three consecutive knockdowns before the referee stopped the fight by technical knockout.

Trinidad spent the next four years defending his title against numerous fighters in bouts televised on Showtime. Among these fights was a defense against Mahenge Zulu, the number two challenger for Trinidad’s championship. This fight was part of a card that took place on April 3, 1998 in Bayamon, Puerto Rico and marked the first time that Trinidad had performed in the island in five years. Trinidad began the first round by cautiously analyzing the challenger’s style, but the round ended with quick exchanges after Zulu took the initiative in the offensive. In the second round Zulu was actively pursuing the champion, but retreated when he received a solid jab sequence. Early in the third round a series of jabs opened a wound on Zulu’s mouth, while the challenger’s punches were not reaching their target. Trinidad began the fourth round heavily on in offensive connecting several combinations which hurt the challenger, using this to land more punches in Zulu’s head and body. One punch hit Zulu in the jaw, he fell to the floor and tried to rise, but the referee stopped the fight before he could do so.

On February 20, 1999, Trinidad defended the welterweight championship against Pernell Whitaker, winning the fight by unanimous decision in a contest that marked his thirteenth successful defense. The fight began with both boxers displaying aggressive styles, which included excessive pushing. In the following rounds both boxers used their jabs most of the time with Trinidad gaining an advantage when Whitaker attempted to attack inside, eventually scoring a knockdown in round two. In the fourth, fifth and sixth rounds the fighters exchanged combinations. Later in the fight both boxers fell to the floor in what were ruled as “accidental slips.” On the seventh round Whitaker displayed more offense, trading power punches with Trinidad, but the champion retained control in the fight’s tempo during the eighth, ninth, and tenth rounds. In the last round Whitaker, with a badly swollen right eye, displayed a purely defensive stance, avoiding his opponent thoughout the round while Trinidad continued on the offensive until the fight concluded. The judges gave the champion scores of 117-111, 118-109 and 118-109.

In the spring of 1999, Don King and Oscar De La Hoya’s promoter, Bob Arum, agreed to co-promote a mega-fight for the Lineal WBC and IBF welterweight championships on September 18, 1999 at the Mandalay Bay Hotel in Las Vegas. Early in the fight De La Hoya employed boxing to connect combinations while avoiding Trinidad’s attacks. The second round began with both boxers trading punches but De La Hoya quickly returned to his previous tactic, which he employed in the third round. In the fourth round Trinidad pressured the offense while De La Hoya tried to avoid his punches by moving, both boxers eventually exchanged punches.