1-800-659-3607
Testimonials
I have just received my order from your company and couldn't have been happier. The artwork on the DVDs was excellent and having the fights printed on each disc helps greatly. I purchased from the other company before and can definitely say that yours is the only company I'll be doing business with from now on. Keep up the good work and look forward to doing a lot of business with you in the future. Oh and by the way, getting the fights delivered in just a few days was a big plus.
D. Leventon
Brooklyn, NY
MIKE TYSON 65 fights on 17 boxing DVDs

Michael Gerard Tyson (born June 30, 1966) is an American actor and former professional boxer who competed from 1985 to 2005. He reigned as the undisputed world heavyweight champion and holds the record as the youngest boxer to win a heavyweight title at 20 years, 4 months and 22 days old.

Tyson’s family lived in Bedford-Stuyvesant until their financial burdens necessitated a move to Brownsville when Tyson was 10 years old. Tyson’s mother died six years later, leaving 16 year old Tyson in the care of boxing manager and trainer Cus D’Amato, who would become his legal guardian. Tyson later said, “I never saw my mother happy with me and proud of me for doing something: she only knew me as being a wild kid running the streets, coming home with new clothes that she knew I didn’t pay for. I never got a chance to talk to her or know about her. Professionally, it has no effect, but it’s crushing emotionally and personally.”

Throughout his childhood, Tyson lived in and around high crime neighborhoods. According to an interview in Details, his first fight was with a bigger youth who had pulled the head off one of Tyson’s pigeons. Tyson was repeatedly caught committing petty crimes and fighting those who ridiculed his high pitched voice and lisp. By the age of 13, he had been arrested 38 times. He ended up at the Tryon School for Boys in Johnstown, New York. Tyson’s emerging boxing ability was discovered there by Bobby Stewart, a juvenile detention center counselor and former boxer. Stewart considered Tyson to be an outstanding fighter and trained him for a few months before introducing him to Cus D’Amato. Tyson dropped out of high school as a junior. He would later be awarded an honorary Doctorate in Humane Letters from Central State University in 1989.

Kevin Rooney also trained Tyson, and he was occasionally assisted by Teddy Atlas, although Atlas was dismissed by D’Amato when Tyson was 15. Rooney eventually took over all training duties for the young fighter.

He fought Henry Tillman twice as an amateur, losing both bouts by decision. Tillman went on to win heavyweight gold at the 1984 Summer Olympics in Los Angeles.

Tyson made his professional debut as an 18 year old on March 6, 1985, in Albany, New York. He defeated Hector Mercedes via a first round knockout. He had 15 bouts in his first year as a professional. Fighting frequently, Tyson won 26 of his first 28 fights by KO or TKO; 16 of those came in the first round. The quality of his opponents gradually increased to journeyman fighters and borderline contenders, like James Tillis, David Jaco, Jesse Ferguson, Mitch Green and Marvis Frazier. His win streak attracted media attention and Tyson was billed as the next great heavyweight champion. D’Amato died in November 1985, relatively early into Tyson’s professional career, and some speculate that his death was the catalyst to many of the troubles Tyson was to experience as his life and career progressed. 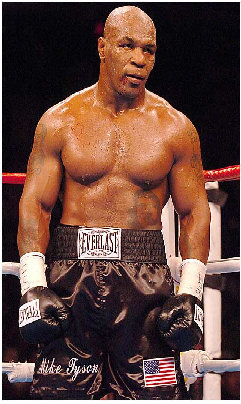