Overall Quality 9-10
Evander Holyfield 40 Career Boxing Fights On 21 DVDs With Motion Menus
This is the highest quality set available, you will be amazed, satisfaction guaranteed.. A must have set for any and all fans of Evander "The Real Deal" Holyfield.

This set comes with full professional motion menus with music, chaptered rounds, complete set in chronological order on 21 high quality DVDs. Includes premium cases and artwork printed on the DVDs.
Orders are carefully packaged in boxes with bubble wrap and shipped out within 24 hours by priority mail (2-3 days). Guaranteed.
Our competitors sell sets in paper sleeves without cases and without artwork printed on the DVDs. They do not make their own custom menus but illegally copy our menus. Please reward the site that spends all the hard time to make these beautiful sets and not the sites that just copy our work.

(Ratings are to compare sets on this web site only. You cannot compare ratings from one site to another because some sites are not honest and rate their sets higher than they should be.)
Price $24.95
ITEM # 1215p
Price $280.00
without artwork on DVDs
with artwork on DVDs + $21
ITEM # 1215 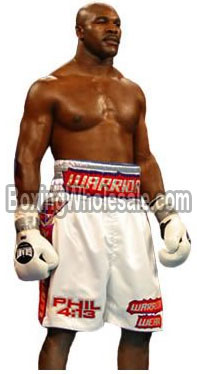 Evander Holyfield (born October 19, 1962) is an American former professional boxer who competed from 1984 to 2011. He reigned as the undisputed champion in both the cruiserweight and heavyweight divisions, being the first and to date only boxer in history to do so, which earned him the nickname of “The Real Deal”. Holyfield is the only four time world heavyweight champion, having held the WBA, WBC, IBF, and lineal titles from 1990 to 1992; the WBA, IBF, and lineal titles again from 1993 to 1994; the WBA title from 1996 to 1999; the IBF title from 1997 to 1999; and the WBA title for a fourth time from 2000 to 2001.

As an amateur, Holyfield represented the United States at the 1984 Summer Olympics, winning a bronze medal in the light heavyweight division. He turned professional at the age of 21, moving up to cruiserweight in 1985 and won his first world championship the following year, defeating Dwight Muhammad Qawi for the WBA title. Holyfield then went on to defeat Ricky Parkey and Carlos de Leon to win the WBC, IBF, and lineal titles, thus becoming the undisputed cruiserweight champion. He moved up to heavyweight in 1988, later defeating Buster Douglas in 1990 to claim the undisputed WBA, WBC, IBF, and lineal heavyweight titles.

He successfully defended the undisputed heavyweight title three times, scoring victories over former champions George Foreman and Larry Holmes, before suffering his first professional loss to Riddick Bowe in 1992. Holyfield regained the crown in a rematch one year later defeating Bowe for the WBA and IBF titles.

Holyfield started out professionally as a light heavyweight with a televised win in six rounds over Lionel Byarm at Madison Square Garden on November 15, 1984. On January 20, 1985 he won another six round decision over Eric Winbush in Atlantic City, New Jersey. On March 13, he knocked out Fred Brown in the first round in Norfolk, Virginia, and on April 20, he knocked out Mark Rivera in two rounds in Corpus Christi, Texas.

Both he and his next opponent, Tyrone Booze, moved up to the cruiserweight division for their fight on July 20, 1985 in Norfolk, Virginia. Holyfield won an eighth round decision over Booze. Evander went on to knock out Rick Myers in the first round on August 29 in Holyfield’s hometown of Atlanta. On October 30 in Atlantic City he knocked out opponent Jeff Meachem in five rounds, and his last fight for 1985 was against Anthony Davis on December 21 in Virginia Beach, Virginia. He won by knocking out Davis in the fourth round.

He began 1986 with a knockout in three rounds over former world cruiserweight challenger Chisanda Mutti, and proceeded to beat Jessy Shelby and Terry Mims before being given a world title try by the WBA Cruiserweight Champion Dwight Muhammad Qawi. In what was called by The Ring as the best cruiserweight bout of the 1980s, Holyfield became world champion by defeating Qawi by a narrow 15 round spit decision. He culminated 1986 with a trip to Paris, France, where he beat Mike Brothers by a knockout in three, in a non-title bout.

In 1987, he defended his title against former Olympic teammate and Gold medal winner Henry Tillman, who had beaten Mike Tyson twice as an amateur. He retained his belt, winning by seventh-round knockout, and then went on to unify his WBA belt with the IBF belt held by Ricky Parkey, knocking Parkey out in three rounds. For his next bout, he returned to France, where he retained the title with an eleven-round knockout against former world champion Ossie Ocasio. In his last fight of 1987, he offered Muhammad Qawi a rematch and, this time, he beat Qawi by a knockout in only four rounds.