Overall Quality 7.5-10
Marco Antonio Barrera is the pride of Mexico City and carries with him the Mexican heart that turns ordinary fighters into legends. After a dominating performance of the seemingly invincible Prince Naseem Hamed, Barrera set his sights on the whole featherweight division. Wiping out the likes of legends like Johnny Tapia, Paulie Ayala, Kevin Kelley, Kennedy McKinney, and being the only man to hand Erik Morales a loss, TWICE! This explosive DVD contains rare lesser known fights progressing to the explosive pay-per view showdowns with the world's most elite fighters. This DVD will play in ANY DVD player in the U.S. or Canada (not sure about worldwide) and in ANY DVD PLAYER INCLUDING PLAYSTATION OR XBOX! It also contains, audio commentary in english, post fight interviews, rare interviews, ring entrances, rare footage, 54 fights in their entirety, interactive menus, and much much more!

(Ratings are to compare sets on this web site only. You cannot compare ratings from one site to another because some sites are not honest and rate their sets higher than they should be.)
Price $23.95
ITEM # 1285p
Price $240.00
without artwork on DVDs
with artwork on DVDs + $21
ITEM # 1285 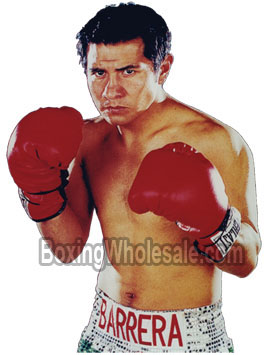 Barrera is well known for his trilogy with fellow Mexican legend Erik Morales, his duology with Manny Pacquiao, and rivalry with Juan Manuel Marquez. ESPN ranked Barrera as number 43 on their list of the 50 greatest boxers of all time. He was inducted into the International Boxing Hall of Fame in 2017.

Barrera announced a comeback in 1998, a year later, and he started off by defeating Angel Rosario by a knockout in round five. After two more wins, he was given another opportunity to fight for a world title by the WBO. On October 31, he became a two time world super bantamwight champion by defeating Richie Wenton by a knockout in three rounds, winning the WBO’s vacant title.

In 1999, he had two title defenses and then he ran into controversy. On December 18, he defeated Cesar Najera in four rounds at California. But upon finding out that Najera had a losing record and was part of Barrera’s team, the California State Athletic Commission decided to rule the fight a no contest bout.

In February 2000, Barrera was defeated by the WBC super bantamweight title holder Erik Morales by a controversial 12 round split decision. It was an intense battle in which both fighters were cut and battered. The Ring named it the fight of the year.

After the bout, the WBO reinstated Barrera as their champion and he defended the title three additional times. On June 17, 2000, he defeated Luiz Freitas (19-1-0) by first round knockout. In his next bout, he defeated Jose Luis Valbuena (18-1-1) by twelve round unanimous decision. On December 1, 2000, he scored a sixth round knockout over former world champion Jesus Salud.

In 2001, Barrera moved up in weight division. On April 7, he handed British boxer Naseem Hamed his first and only loss for the lineal featherweight championship by a twelve round decision. Before the fight, Hamed was a 3 to 1 betting favorite in Las Vegas. Hamed could not his Barrera with his trademark lifts as Barrera circled to his left and worked both head and body. Barrera was not a fan of Hamed’s antics and responded to Hamed’s punches during clinches. On one occasion early in the fight, Hamed grabbed Barrera and they both fell to the ground where Barrera threw a right jab, leading to a warning from referee Joe Cortez. In the 12th and final round Barrera trapped Hamed in a full nelson and forced his head into the turnbuckle, resulting in a point deducted by referee Joe Cortez. Ultimately, Barrea threw more, harder punches and more impressive combinations than Hamed throughout the course of the fight. Barrera was awarded the victory via a unanimous decision, with the scorecards reading 115-112, 115-112, 116-111 and won the lineal and IBO featherweight titles. On September 8, 2001, he defeated former champion Enrique Sanchez by sixth round TKO.

On June 22, 2002, Barrera defeated Morales in a rematch via a unanimous decision, successfully defending his lineal title and winning the vacant Ring magazine title but declined Morales’ the WBC belt. On November 2, he defeated former five time world champion Johnny Tapia by a 12 round unanimous decision. Barrera then competed in his 60th career fight on April 12, 2003, defeating former WBC title holder Kevin Kelley by knockout in round four.