Overall Quality 6.5-9.5
This is the most complete Prince Naseem Hamed set offered anywhere! It is jam packed with 34 explosive fights from his very first televised fight in sheffield, all the way to his comeback bout against a very game Calvo. All ring entrances included. these are very rare and show an 18 year old Hamed dancing in front of a small crowd sitting in folding chairs on his way to the ring! This is a very rare collection and you won't find this anywhere else! Own a piece of history, a collector's item.

1-800-659-3607
Testimonials
Thank you so much for the timely manner in which my order was shipped. I was shocked it arrived so soon, and it's awesome. Thank you so much, I'll definitely be coming back to BoxingWholesale for future purchases.
D. Slavin
Houston, TX

(Ratings are to compare sets on this web site only. You cannot compare ratings from one site to another because some sites are not honest and rate their sets higher than they should be.)
Price $19.95
ITEM # 1230p
Price $180.00
without artwork on DVDs
with artwork on DVDs + $18
ITEM # 1230 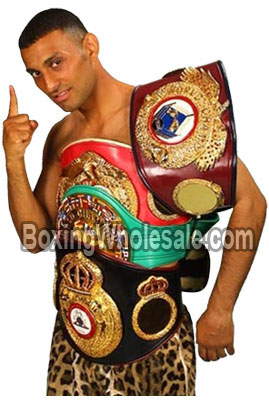 Hamed was known for his unconventional boxing antics and spectacular ring entrances which included entering the ring on a flying carpet, a lift, and a palanquin, as well as re-enacting the video of Michael Jackson’s Thriller, and wearing a Halloween mask. He was also known for his front somersault over the top rope into the ring, his highly athletic and hard’hitting southpaw boxing style, and formidable one punch knockout power; having finished his career with a knockout-to-win ratio of 84%.

In February 1997, Hamed defeated long time IBF champion Tom “Boom Boom” Johnson in eight rounds in a unification bout at the London arena. After being constantly stunned and staggered from round 3 onwards, Johnson was finally dropped by a huge uppercut, then saved from further punishment by the referee. Hamed’s first defence of both the WBO & IBF titles was a first round KO of veteran British boxer and European champion Billy Hardy. Before the bout Hamed had correctly predicted he would win in round 1. The next defence was an easy two round win against a hugely outclassed Juan Gerardo Carbrera. Due to Boxing politics involving the IBF’s mandatory challenger, Hamed was soon forced to relinquish the IBF title.

In Hamed’s hometown of Sheffield in October 1997, he produced one of the best performances of his career in defending his WBO title against Jose Badillo, whose corner entered the ring to stop the fight during round 7.

In late 1997 Hamed made his heavily hyped U.S. debut. His ceremonious arrival on the British Airways Concorde was covered by multiple media outlets. There, he and former WBC title holder Kevin Kelley fought in a highly entertaining bout. This fight marks something of a watershed in Hamed’s career, as he was forced, for the first time to abandon his hands-down style of fighting throughout the entire course of the bout, given the caliber of Kelley. Nonetheless, despite suffering three knockdowns himself, Hamed put Kelley down for a third and final time to win by a fourth round knockout. This was his first of many fights on HBO.

In October 1999 at Joe Louis Arena, Detroit, Michigan, Hamed defeated WBC featherwight champion Cesar Soto of Mexico over 12 rounds, adding the WBC title to his collection and unified the WBC & WBO titles. Hamed soon chose to relinquish his WBC title due to his commitment to being WBO champion.

Had Vazquez not been stripped by the WBA of his belt (the WBA did not want their featherweight title unified with the WBO), Hamed would have had the distinction of winning all four world titles in a division, something only Riddick Bowe had achieved by that point, at heavyweight.