Ricardo Mayorga 13 Career Boxing Fights On 7 DVDs With Menus
Overall Quality 9.5-10
Ricardo Mayorga is known as "El Matador" for his incredible power, knockout record, and having one of the best chins in the boxing industry. Mayorga enjoys lighting up a cigar every time he wins a fight and who is a confessed smoker of two packs of cigarettes a day when he is not doing his boxing training. He also likes to stick his chin out for his opponents to hit him. He never went down using this maneuver but many people believe he does this to intimidate the other boxer to thinking Mayorga will never go down no matter what they do.

1-800-659-3607
Testimonials
Thank you so much for the timely manner in which my order was shipped. I was shocked it arrived so soon, and it's awesome. Thank you so much, I'll definitely be coming back to BoxingWholesale for future purchases.
D. Slavin
Houston, TX
RICARDO MAYORGA 13 FIGHTS ON 7 BOXING DVDS

CONTACT US
HOME PAGE
TRILOGY DVDS
POKER
FREE SHIPPING
SPECIAL DVD SETS
PICK A FIGHT
BOXING SCHEDULE
PAY PER VIEW BOXING
(Ratings are to compare sets on this web site only. You cannot compare ratings from one site to another because some sites are not honest and rate their sets higher than they should be.)
Price $19.95
ITEM # 1170p
Price $140.00
without artwork on DVDs
with artwork on DVDs + $15
ITEM # 1170 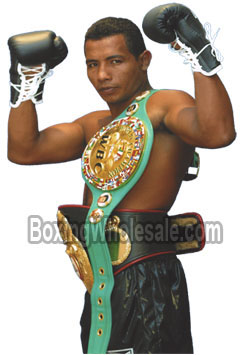 Ricardo Antonio Mayorga Perez (born October 3, 1973), is a Nicaraguan professional boxer and mixed martial artist.Somewhere it is written that professional boxers must adopt a nom de ring, no matter how trite or ill fitting. Thus the pugilistic landscape is littered with ponderous Cheetahs and gelatinous Rocks. There are more Rockys than there are Rocky sequels.

Then there is Ricardo Mayorga. The welterweight champion might be nicknamed El Matador, It’s even tattooed on the side of his neck, but the handle could scarcely be less accurate. Matadors succeed with a combination of grace and precision; Mayorga does so with sheer power and aggression. If anything, his moniker should be El Toro. He is rash and impetuous, while matadors are calculating and poised. Perhaps most telling: While matadors merely flirt with death, Mayorga all but stalks it.

These first 30 years of Mayorga’s life are replete with near misses. As a teenager in Nicaragua he spent six years in a gang and twice stared down the barrel of a gun. Both times, he says the weapon jammed. He has a half dozen scars commemorating various knife fights, a scar on top of his head was produced by a lead pipe. He is a drag-racing fiend whose preferred pastime is Via de la Suerte (the Street of Luck), a “game” that involves gunning his tricked-up Honda coupe and speeding through the red light at a busy intersection. As if we need further evidence of a self-destructive streak, he has a notorious pack-a-day smoking habit. And, of course, his line of work isn’t exactly OSHA-approved. “I know I push the envelope of danger, but God had been very good to me,” he says with a shrug. “I should probably be dead by now.”

Instead he is breathing life into his moribund sport. A slugger whose wildly entertaining style, such as it is, entails unleashing a hail of punches from bell to bell, Mayorga is suddenly one of the hottest acts in boxing. He KO’d highly-regarded Andrew (Six Heads) Lewis in a mild upset. He needed only three rounds to clock Vernon (the Viper) Forrest, previously undefeated and the 2002 Fighter of the Year, in a considerable upset. When he decisioned Forrest in an exhilarating July rematch, he had proved his mettle. “Ricardo Mayorga is the truth, and that’s no lie,” says his promoter, Don King, “Plus, he has the adrenaline to meet the prophecy.”

Translation: Mayorga has a personality that, by comparison, renders Ali an introvert and Tyson a Calvinist. Mayorga isn’t from another era so much as he’s from another planet. The night before his rematch with Forrest, Mayorga was on the floor of the host casino at 3 AM, a cigarette in his hand, a woman on his arm, a diminishing stack of chips in his grasp. When he retired to his room shortly afterward, he fell asleep in his street clothes, woke a few hours later and won the fight. While sparring at his training camp in Fort Pierce, FL, he beseeched his corner to ply him with rum between rounds. The following morning at breakfast he gave his order to a perky waitress and promptly announced to his dining companions, “It’s a good thing I don’t speak better English or I’d (romance) all your women.”

Though Mayorga speaks through an interpreter, he has become boxing’s reigning champ of the ritual preflight smack-talking. According to Mayorga, Oscar de La Hoya is a maricon (a homosexual) in need of a set of cojones. Shane Mosley is a payaso (clown) who should be shining Mayorga’s shoes.

About the only thing Mayorga filters are his cigarettes. In addition to the obligatory nickname, every boxer needs a shtick, and the “fistic fumigator” is a good one. But Mayorga is not merely blowing smoke when he blows smoke. “I don’t do it to show off,” he says, dragging on a Marlboro. “I’m addicted.” Yet contrary to all conventional (and unconventional) wisdom, he has the stamina of a marathoner, running five miles a day and often sparring for more than an hour. In his last fight (the decision over Forrest), Mayorga endured 12 rounds and looked little the worse for wear.