Shane Mosley 32 Career Boxing Fights On 19 DVDs With Motion Menus
Overall Quality 9.5-10
This is a top notch set with motion menus, the sound and picture quality is a 9.5-10! I personally guarantee the quality of this awesome set, they don't get better than this.

This set comes with full professional motion menus with music, chaptered rounds, complete set in chronological order on 19 high quality DVDs. Includes premium cases and artwork printed on the DVDs.
Orders are carefully packaged in boxes with bubble wrap and shipped out within 24 hours by priority mail (2-3 days). Guaranteed.
Our competitors sell sets in paper sleeves without cases and without artwork printed on the DVDs. They do not make their own custom menus but illegally copy our menus. Please reward the site that spends all the hard time to make these beautiful sets and not the sites that just copy our work.

(Ratings are to compare sets on this web site only. You cannot compare ratings from one site to another because some sites are not honest and rate their sets higher than they should be.)
Price $19.95
ITEM # 1150p
Price $280.00
without artwork on DVDs
with artwork on DVDs + $24
ITEM # 1150 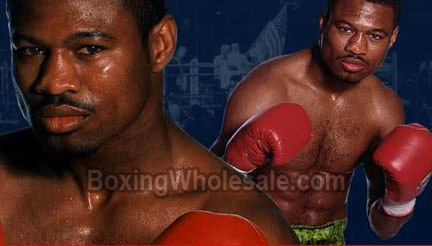 Shane Andre Mosley (born September 7, 1971), is an American former professional boxer who competed from 1993 to 2016. He is a four time world champion in three weight classes.

On February 11, 1993 a 21 year old Mosley made his professional boxing debut in a scheduled six round fight at the Hollywood Palladium in Hollywood, California. His opponent was Greg Puente, who he knocked out in round five. Mosley fought a further 6 times in 1993, winning all them inside the distance. In 1994, Mosley fought 9 times, winning all them and 8 inside the distance. He was taken the 10 round distance by Oscar Lopez. In April 1995, Mosley knocked out Raul Hernandez in round 2 at the Warner Center Marriott in Woodland Hills, California. In July he knocked out 34 year old veteran Mauricio Aceves in round 4 at the Arrowhead Pond in Anaheim, California. Aceves was best known for being the first ever WBO World lightweight champion.

In January 1996, Mosley had his first fight outside of California since beginning his pro career. He fought at the Grand Casino in Biloxi, Mississippi knocking out 35 year old Mike Bryan in round one. By May 1997, Mosley went 23 fights unbeaten, with 22 coming inside the distance.

On August 2, 1997 Mosley fought for his first world title, the IBF Lightweight championship against then undefeated titleholder Philip Holiday (31-0, 16 KOs). Holiday was making his seventh defence of the title since winning the then vacant title in 1995. It took place at the Mohegan Sun Casino in Uncasville, Connecticut and was the first time Mosley was scheduled to box 12 rounds. The fight went the full 12 round distance as Mosley took Holiday’s IBF title via a unanimous decision. The three judges scored the fight 116-113, 117-111, 115-114 all in favor of Mosley.

Mosley made his first title defence on November 25 at the County Coliseum in El Paso, Texas against Mexican Manuel Gomez (17-8, 14 KOs). Mosley knocked him out in round 11 to retain his title.

On February 6, 1998 Mosley defeated 24 year old Demetrio Ceballos (20-1, 13 KOs) at the Mohegan Sun Casino in Uncasville. Ceballos was down once in round 4 after an overhand right and left hook to the body. He was down again in round 8 following a flurry of punches before referee Eddie Cotton called an end to the fight. At the time of stoppage, Mosley was ahead on all cards (70-61, 70-62, 70-62).

In May 1998, Mosley knocked out former world super featherweight champion and world lightweight challenger John John Molina (45-4, 30 KOs) in round 8 at the Trump Taj Mahal in Atlantic City, New Jersey. Molina was also dropped to his knees in round 7.

On June 27, 1998 Mosely knocked out Colombian boxer Wilfrido Ruiz (25-3, 19 KOs) in round 5. He then fought at the Madison Square Garden Theater in New York City on September 22, 1998 against Eduardo Bartolome Morales (26-0, 21 KOs). Morales was knocked down in the 3rd round, and eventually stopped in round 5.