(Ratings are to compare sets on this web site only. You cannot compare ratings from one site to another because some sites are not honest and rate their sets higher than they should be.)
Price $19.95
ITEM # 1155p
Price $240.00
without artwork on DVDs
with artwork on DVDs + $20
ITEM # 1155 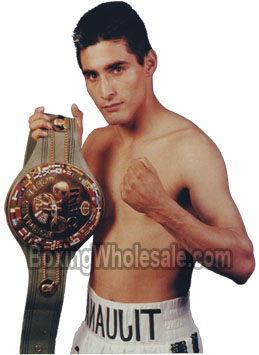 Erik Morales vacated his WBC Featherweight title and moved up to the super featherweight division. On February 28th, 2004, Morales captured the WBC Super Featherweight title by unanimous decision over Jesus Chavez. Morales twice knocked down Chavez, which Floyd Mayweather, Jr. had been unable to do. Morales was rocked midway through the 1st round, but he came back to score two knockdowns in the 2nd round and managed to cut Chavez over the left eye. Chavez injured right shoulder eary in the fight and threw very few right hands, but still fought aggressively for the rest of the fight with his jab and left hooks which cut Morales over the eye in the 4th round. With the victory he became the second Mexican boxer to win a itle at three separate weight divisions, the fist being the acclaimed Julio Cesar Chavez.

On November 27th, 2004 Morales fought Barrera for the third time in a bout for the WBC Super Featherweight title. Their highly anticipated third battles drew a capacity crowd of over 11,000. Barrera started fast and rocked Morales late in the first round and bloodied his nose in the second half of the fight and won four of the last six rounds on two judges' scorecards. However, the judges scored the bout 114-114,114-115,113-115 in favor of Barrera, in what was justifiably a very, very close but non-controversial justifiable win for Barrera. Their third meeting was once again named The Ring Fight of the Year.

Morales vs. Pacquiao I

On March 19th, 2005 as a betting underdog, Morales defeated then three-division world champion Filipino boxer Manny Pacquiao, by a unanimous decision. During the 12th round, Morales, comfortably ahead on the scorecards, decided to brawl with the Filipino slugger, even turning southpaw during the process. In a post fight interview, HBO broadcaster Larry Merchant, asked Morales, "Why?" Morales replied by asking a question of his own, "Did you enjoy it? That's why."

Later that night, at the post-fight press conference, Erik further explained his reasoning for brawling with the Filipino slugger; "It was a great pleasure to fight this way. I think I was controlling the fight with my distance. Sometimes I need to put a little flavor into the ring. My promoter always says that I make the fights very difficult, but they're not difficult, theyre fun for the public. I decided to stop myself in front of him in the twelfth round because I wanted to give the public what they deserve. It was a great round. I'm very happy about it."

On September 10th, 2005 Erik Morales moved up to the lightweight division and was defeated by unanimous decision by Zahir Raheem. Raheem frustrated Morales with constant lateral movement. Raheem rocked Morales in the 5th round and built a lead on the scorecards, but Morales rallied in the 11th round and staggered him with a right hand as Raheem's glove touched the canvas, but it was not scored a knockdown by referee Jon Schorle.The final scores were 118-110, 116-112 and 115-112 in favor of Raheem.

On January 22nd, 2006 Morales fought Pacquiao in a rematch from their bout ten months before and was defeated in ten rounds. Pacquiao knocked down Morales twice in the final seconds of round ten and the fight was stopped.

He fought Pacquiao for the third time in a non-championship title bout, on November 18th, 2006. Morales was defeated by a knockout in the three rounds. After the fight, Morales said "Maybe it's time I should no longer be doing this." He sat speechless in his corner for five minutes afterward. "I did everything in camp necessary to win this fight. I didn't win it. It wasn't my night...it just wasn't meant to be." Asked by Larry Merchant whether he would retire from boxing, Morales offered, "Maybe this is the way to end it. It's a beautiful night, and there's a lot of good people (here in the audience)...it was always a pleasure to give the public great fights."