Complete set in chronological order on 21 high quality DVDs. Includes premium cases and artwork printed on the DVDs.
Orders are carefully packaged in boxes with bubble wrap and shipped out within 24 hours by priority mail (2-3 days). Guaranteed.
Our competitors sell sets in paper sleeves without cases and without artwork printed on the DVDs. They do not make their own custom menus but illegally copy our menus. Please reward the site that spends all the hard time to make these beautiful sets and not the sites that just copy our work.

(Ratings are to compare sets on this web site only. You cannot compare ratings from one site to another because some sites are not honest and rate their sets higher than they should be.)
Price $20.95
ITEM # 1195p
Price $280.00
without artwork on DVDs
with artwork on DVDs + $26
ITEM # 1195 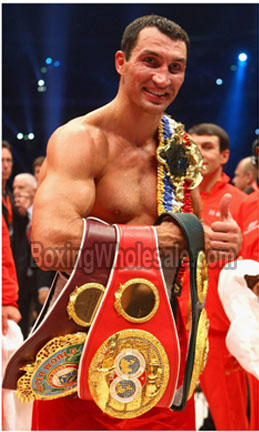 Wladimir Wladimirowitsch Klitschko (born March 25, 1976) is a Ukrainian former professional boxer who competed fro 1996 wo 2017. He is a two time world heavyweight champion.

Klitschko turned professional with Universum Box-Promotion in Hamburg under the tutelage of Fritz Sdunek, often being featured on fight cards alongside his elder brother Vitali. After building an undefeated record of 24-0 with 22 KOs, he suffered his first loss to 24-13-1 Ross Puritty, in what was Klitschko’s first and only professional fight in Ukraine. Klitschko’s coach, Fritz Sdunek, stopped the fight. On March 18, 2000, Klitschko fought Paea Wolfgramm, whom he fought previously in the 1996 Super Heavyweight Olympic Finals. In their professional rematch, Klitschko knocked Wolfgramm out in the first round.

On October 14, 2000, in Cologne, Germany’s Kolnarena, Klitschko won the WBO heavyweight Championship from American Chris Byrd by a wide unanimous decision by scores of: 120-106, 119-107, and 118-108, flooring his opponent twice. Byrd had previously upset his elder brother Vitali (who pulled out injured during their bout).

Klitschko suffered an upset TKO loss to Corrie Sanders on March 8, 2003 in Hanover, Germany. Sanders dropped Klitschko twice in the opening round and scored two more knockdowns in the second round before the bout was stopped by the official. The fight was named The Ring magazine Upset of the Year for 2002.

After winning two minor bouts in Germany and enlisting the services of legendary boxing trainer Emanuel Steward, Klitscho again fought for the vacated WBO title on April 10, 2004, in Las Vegas, against Lamon Brewster. Klitschko sent Brewster to the canvas in the fourth round; however, things turned around in the fifth when Brewster’s punches began backing him up. Not defending himself and leaning into ropes for support, Klitschko took a standing eight count. On unsteady legs, Klitschko fell to the canvas after the bell and the referee stopped the fight for his safety.

On April 22, 2006, in Mannheim, Germany, Klitschko defeated Chris Byrd for a second time, this time by technical knockout, in a contest for the IBF and IBO Heavyweight Championships. Referee Wayne Kelly stopped the fight in the seventh round after a knockdown. Byrd beat the count, but his face was battered and bloody, and the fight was waved off.

He returned in November, defeating Calvin Brock at Madison Square Garden. Klitschko then defeted mandatory challenger ray Austin on March 10, 2007, at the SAP Arenea in Mannheim, Germany by a second round knockout with four consecutive left hooks to Austin’s head.