(Ratings are to compare sets on this web site only. You cannot compare ratings from one site to another because some sites are not honest and rate their sets higher than they should be.)
Price $17.95
ITEM # 1125p
Price $140.00
without artwork on DVDs
with artwork on DVDs + $15
ITEM # 1125 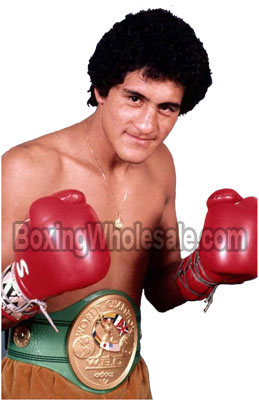 Mexico City, Aug. 12, 1982 – Salvador Sanchez, the World Boxing Council’s featherweight titleholder and one of the more accomplished of current champions, was killed early today when his sports car collided with a truck on a highway north of here.

Sanchez, who was 23 years old, successfully defended his crown for a ninth time last month in New York and was already in training for a title fight scheduled for Madison Square Garden Sept. 15 against Juan LaPorte, a New Yorker.

They young boxer’s death stunned and puzzled Mexican sporting circles. During preparations for a fight, Sanchez normally went to bed at 9 P.M. and was up at 5:30 A.M. to do road work. It was not immediately known why he was driving his Porsche 928 between Queretaro and his training camp at San Jose Iturbide, 160 miles north of Mexico City, at 3:30 A.M., when the crash occurred.

In contrast to many previous Mexican champions, Sanchez had a reputation for being disciplined both in his personal life and inside the ring. “I like to have a good time like anyone else,” he said in a recent interview, “but when I’m in training, that’s what I concentrate on. It’s my job, and I have to do it properly. I can’t disappoint my public and, most of all, myself.”

In the ring, Sanchez was methodical, rarely seeking a quick knockout but instead slowly measuring his opponent and then gradually destroying him. As was typical, his fight last month at the Garden against Azumah Nelson of Ghana went into the 15th round before Sanchez won by a knockout. He ended the bout with his face virtually unmarked.

Despite his record of 43 victories 1 defeat and 1 draw, however, he had earned less of a following in Mexico than some more sensational – and wild – fighters of the past. He still seemed eager to prove himself, and as a result he talked about moving up two divisions to challenge for the W.B.C. lightweight crown, held by Alexis Arguello of Nicaragua.

But he had nevertheless decided to retire from boxing at the end of next year, undefeated, he hoped, in the featherweight division, whose limit is 126 pounds. “I’ve already distinguished myself in boxing,” he said with quiet self-assurance last month. “Now I’d like to distinguish myself in life. I want to carry on studying and become a doctor.”

Born to a lower-middle-class family in the nearby town of Santiago Tianguistenco, Sanchez began boxing at the age of 14 and dropped out of school two years later to turn professional. Having moved to Mexico City, he was introduced to a wealthy lawyer, Juan Jose Torres Landa, who had served as adviser to four previous Mexican world champions.

When Sanchez finally challenged Danny (Little Red) Lopez for the featherweight crown in February 1980, Mexican critics said the bid was premature. But Sanchez scored a 13th round knockout and, in a return bout four months later, again won, this time knocking out Lopez in the 14th round and sending him into retirement.