This set comes with full professional motion menus with music, chaptered rounds, complete set in chronological order on 5 high quality DVDs. Includes premium cases and artwork printed on the DVDs.
Orders are carefully packaged in boxes with bubble wrap and shipped out within 24 hours by priority mail (2-3 days). Guaranteed.
Our competitors sell sets in paper sleeves without cases and without artwork printed on the DVDs. They do not make their own custom menus but illegally copy our menus. Please reward the site that spends all the hard time to make these beautiful sets and not the sites that just copy our work.

(Ratings are to compare sets on this web site only. You cannot compare ratings from one site to another because some sites are not honest and rate their sets higher than they should be.)
Price $19.95
ITEM # 1295p
Price $100.00
without artwork on DVDs
with artwork on DVDs + $10
ITEM # 1295 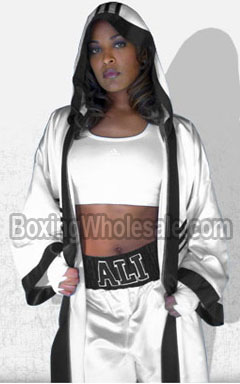 Laila Amaria Ali (born December 30, 1977) Laila is undoubtedly one of the best and most recognized female fighters in the world today. Like her father, the 5’10” Ali has quick feet, a stiff jab and natural self confidence.

October 8, 1999 – Laila “She Bee Stingin’ “ Ali (5’10”, 166 lbs) made her ring debut at 21 years old against April Fowler of Michigan City, Indiana, at the Turning stone Casino Convention Center on the Oneida Indian Nation in Verona, New York. Laila made fast work of Fowler, as she knocked her out in 31 seconds.

November 10, 1999 – Laila won her second professional bout against Shadina Pennybaker by TKO with 3 seconds left in the match. The fight occurred at the Mountaineer Race Track in Chester, West Virginia. Pennybaker was making her own pro debut after going 2-1 as an amateur. Laila bloodied Pennybaker’s lip and forced a standing eight count in the fourth when she knocked Pennybaker’s mouthpiece out. A flurry of left-right combinations sent Pennybaker reeling into a corner and produced a stoppage of the fight.

December 10, 1999 – Laila again won by TKO, this time in the second round over 6’3” Nicolyn Armstrong, at the Cobo Center Riverfront Ballroom in Detroit, Michigan. Laila knocked Armstrong down late in the first round with a jab followed by three hard rights. In the second round, Laila battered Armstrong in a corner then knocked her flat on her back. Referee Sam Williams stopped the bout immediately, awarding Laila the knockout.

March 7, 2000 – Laila (160 lbs) moved to 4-0 with 4 KO’s by knocking out Crystal Arcand (169 lbs) of St. Paul, Alberta, Canada at 1:10 in the first round at Casino Windsor in Windsor, Ontario, Canada. Arcand, a former Toughwoman competitor, was making her pro debut after going 5-0 in amateur action. Arcand came out swinging wildly, but Laila circled and landed a jab-uppercut combination that sent Arcand to the canvas after just 15 seconds. Arcand got up and Laila continued the attack, putting Arcand on the canvas again with a straight right to the head. Arcand got up to one knee but no further as she was counted out just 70 seconds into the bout.

April 8, 2000 – at the Joe Louis Arena in Detroit, Michigan, Laila (168 lbs) continued her dominance with a third round TKO of Karen Bill (166 lbs) of Lawton, Oklahoma. Although Bill knocked Laila down with an uppercut in the second round, Laila showed she had come to fight by getting up and dominating the fight from that point on. In the third round Laila bloodied Bill’s face and landed clean punches freely until the referee suddenly stopped the fight in Ali’s favor.

April 22, 2000 – Laila’s next career move took her to Tian He stadium in Guangzhou (Canton), China, where she appeared on the first major pro boxing card in China since the founding of the People’s Republic. Laila (165 lbs) capped several days of activity as a publicity magnet for the card by battering Kristina King (5’8”, 166 lbs) to TKO 0:37 seconds into the fourth round. King, was a 30 year old former Toughwoman contestant from Muskegon, Michigan, with a record of 20-0. However, she lacked the skills to handle Lails’s combinations and movement and work her way inside. She was rocked in the second round, then badly bloodied in the third round, when a booming right hand from Laila knocked out King’s mouthpiece. King was game to keep on fighting in the fourth but Laila quickly had her in big trouble and the fight was stopped as Laila earned another TKO.