(Ratings are to compare sets on this web site only. You cannot compare ratings from one site to another because some sites are not honest and rate their sets higher than they should be.)
Price $19.95
ITEM # 1280p
Price $160.00
without artwork on DVDs
with artwork on DVDs + $15
ITEM # 1280 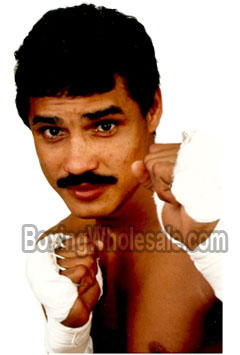 After a successful fourth defense, Arguello moved up in weight to challenge world junior lightweight champion Alfredo Escalara in Bayamon, Puerto Rico, in what has been nicknamed The Bloody Battle of Bayamon by many. Escalera had been a busy champion with ten defenses, and he had dethroned Kuniaki Shibata in 2 rounds in Tokyo. In what some experts (including The Ring writers) consider one the most brutal fights in history, Escalera had his eye, mouth and nose broken early, but was rallying back in the scorecards when Arguello finished him, once again in the thirteenth round.

His reign at Junior Lightweight saw him fend off the challenges of Escalera in a rematch held at Rimini, Italy, as well as former and future world champion Bobby Chacon, future two time world champion Rafael "Bazooka" Lion, Ruben Castillo, future champion Rolando Navarrete, and Diego Alcala, beaten in only one round.

Arguello suffered many cuts around his face during his second victory against Escalera. The on-site doctor wanted him hospitalized, but Arguello had a flight to catch to Rome the next day to return to Nicaragua, and he boarded a train from Rimini. The doctor decided to travel with Arguello, and performed plastic surgery on Arguello's cuts with Arguello awake.

After eight successful title defenses, Arguello then moved up in weight again, and this time he had to go to London, England, to challenge world lightweight champion Jim Watt. Watt lasted fifteen rounds, but the judges gave Arguello a unanimous 15-round decision, thus making him only the sixth boxer to win world titles in 3 divisions, and the second Latin American (after Wildred Benitez had become the first by beating Maurice Hope one month before, to do it. He had to face some less known challengers in this division, one exception being the famous prospect Ray Mancini (known as "Boom Boom" Mancini). Mancini and Arguello engaged in a fight that was later showcased in a boxing video of the best fights of the 1980s, with Arguello prevailing by stoppage when he decked Mancini and told a CBS Television audience that he would do anything to help Mancini's father, who at the time was dealing with illness. Andrew Ganigan proved to be one of Arguello's toughest challenges as he dropped Arguello in the second round, but ultimately the defending champion prevailed by stopping Ganigan in the fifth.

Arguello successfully defended his lightweight title four times. After defeating James 'Bubba' Busceme by sixth round stoppage, Arguello decided to move up in weight class again and on November 12, 1982, he tried to become the first world champion in 4 different categories, meeting the heavier and future Hall-of-Famer AAaron Pryor, in what was billed as The Battle of the Champions in Miami, Florida. Arguello was stopped in the 14th round. The fight sparked controversy, however, because Pryor's trainer, Panama Lewis, introduced a second water bottle which he described as "the bottle I mixed" after round 13, leading to speculation that the bottle was tainted. The Florida State Boxing Commission failed to administer a post-fight urinalysis, adding to speculation the bottle contained an unsanctioned substance. Lewis claimed at various times that the bottle was filled with peppermint schnapps or Perrier to help Pryor deal with an upset stomach. It was later revealed in an interview with former Lewis-trained boxer Luis Resto that Lewis would break apart antihistamine pills used to treat asthma and pour the medicine into the water, giving Lewis's fighter greater lung capacity in the later rounds of a fight. Others say that there was a mixture of cocaine, honey and orange juice in the bottle.