(Ratings are to compare sets on this web site only. You cannot compare ratings from one site to another because some sites are not honest and rate their sets higher than they should be.)
Price $19.95
ITEM # 1090p
Price $240.00
without artwork on DVDs
with artwork on DVDs + $16
ITEM # 1090 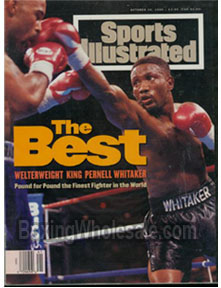 To watch Pernell Whitaker perform in the ring left everyone, fans, press and opponents alike, to speculate on the meaning of what they’d just seen. For his was an ambiguous style, his motions giving off ineluctable lies.

It was a style that could be described expansively but never plausibly, because nothing about it was plausible. And no single description could adequately describe it. To some, it was a form of fistic break dancing. To others, that of a three card monte player, a now-you-see-him-now-you-don’t style. And to still others, that of fun-house mirror, a style which enabled him to run and hide at one and the same time. (or, as Whitaker himself once said, “I don’t care who I’m fighting. I don’t care if it’s God. If I don’t want God to hit me, He’s not going to hit me.”) In short, his Turkish bazaar of moves and motions made him one part magician, one part mechanic and one part contortionist who had just come into his own.

However, it may be described as a style that made great demands upon his opponent, leaving him to grope for the gypsy phantom in front of him, all the while expecting, like a Sunday school teacher, to be hit in the back of the head by an errant spitball the minute he turned his back.

The closest anyone came to describing Whitaker’s style was Evander Holyfield who, when asked after the ’84 Olympics which fighter might fare best in his pro career, said of Whitaker and his style: “I think Pernell will be the best. His finesse, the way he thinks. He’s a sneaky guy, in a nice way, and he boxes sneaky. He’ll throw his arm out and if you flinch, he probably won’t throw a punch. But if you don’t he might pop you.”

The little 5-foot-6 southpaw they called “Sweet Pea” first put his multiple talents on national display in those Los Angeles Olympics, winning four unanimous decisions over opponents who couldn’t get within cab-hailing distance of him, and then stopping Puerto Rico’s Luis Ortiz to win the lightweight gold. Afterward, the gold medal-winning Whitaker would gush, “They placed that medal around my neck and played the national anthem. Nothing else I do in life will top that feeling. After winning the gold medal, everything else is icing on the cake.”

Without minimizing Whitaker’s enthusiastic reaction to winning the gold, from that point on his career would not so much be “icing on the cake,” as he called it, but a cakewalk for the little man with more looks than could be found in an Easter parade.

Four months after winning the gold, Whitaker debuted as a pro along with fellow Olympians Holyfield, Mark Breland, Meldrick Taylor and Tyrell Biggs on a card appropriately called “Night of Gold.” But it wasn’t so much that Whitaker disposed of his opponent in two rounds; it was that he outshone the other four, putting on a display of moves unseen since the heyday of Willie Pep.

That would be the first of his many virtuoso performances, as Whitaker proceeded to run off a string of victories, leaving his opponents standing around opening and closing their mouths like fish out of water, unable to find him with a Geiger counter, his moves pure poetry in motion. Or, more correctly, pure poetry in many motions.

Not content to merely put on boxing exhibitions, Sweet Pea added another element: showboating. Explaining his reason for entertaining as much as boxing, Whitaker told one reporter: “People pay good money to come see me fight. I feel I owe it to them to put on a show. One thing they know for sure: They come to see Sweet Pea, they get their money’s worth.”