This set comes with full professional motion menus with music, chaptered rounds, complete set in chronological order on 11 high quality DVDs. Includes premium cases and artwork printed on the DVDs.
Orders are carefully packaged in boxes with bubble wrap and shipped out within 24 hours by priority mail (2-3 days). Guaranteed.
Our competitors sell sets in paper sleeves without cases and without artwork printed on the DVDs. They do not make their own custom menus but illegally copy our menus. Please reward the site that spends all the hard time to make these beautiful sets and not the sites that just copy our work.

CONTACT US
HOME PAGE
TRILOGY DVDS
POKER
FREE SHIPPING
SPECIAL DVD SETS
PICK A FIGHT
BOXING SCHEDULE
PAY PER VIEW BOXING
(Ratings are to compare sets on this web site only. You cannot compare ratings from one site to another because some sites are not honest and rate their sets higher than they should be.)
Price $19.95
ITEM # 1105p
Price $220.00
without artwork on DVDs
with artwork on DVDs + $16
ITEM # 1105 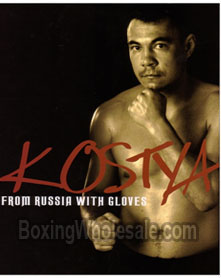 Konstantin Borisovich “Kostya” Tszyu (born 19 September 1969) is a sovie born Australian former professional boxer who competed from 1992 to 2005. He held multiple world championships at light welterweight, including the undisputed and lineal titles of that division between 2001 and 2005. Tszyu was an exceptional all around boxer puncher who relied heavily on accuracy and timing, and carried formidable punching power; he is often regarded as one of the hardest punching light welterweights in the division’s history.

Tszyu then began pursuing his wish to unify all the belts. In 2001, he began by facing wBA Champion Sharmba Mitchell, taking the belt by a TKO after seven rounds (Mitchell suffered a knee injury in training, and during the bout). His next fight was against the German Turk, Oktay Urkal. Tszyu finished 2001 by recovering his IBF belt in a unification bout with the current champion Zab Judah, by a knockout in the second round. A small melee inside the ring followed that fight when Judah attacked referee Jay Nady for what he felt was a premature stoppage, reacting by throwing his corner’s seat at the referee and even trying to choke Nady with his glove at one point. However, replays clearly show Judah walking on wobbly legs. As a result, Tszyu became the first man in 30 years to unify the belts in the light welterweight division.

Tszyu in 2002 had only one bout, beating the top ranked contender of all three of his belts, Ben Tackie of Ghana by a decision in twelve rounds. Tszyu lost only one round on only one of the judges scorecards in a masterful display of boxing.

On 19 January 2003, Tszyu began the year by retaining his title against former world champion Jesse James Leija by a knockout in six. After the fight, held in Melbourne, Tszyu announced that fight could be his last in Australia, due to pressure from promoters to fight in the United States (The win against Leija came on the birthday of Tszyu’s son).

His first fight in 2004 was supposed to have been held on February 7 in a rematch against Sharmba Mitchell. It would have been Tszyu’s first fight as a professional in Moscow, but Tszyu injured his sholder during training. He had successful surgery to correct the problem, but th injury further extended his absence from the ring. On November 6, he an Mitchell finally had their rematch, with Tszyu knocking Mitchell out once again, this time in three rounds. Tszyu was voted comeback fighter of the year by Ring magazine. The bout which was aired on American cable giant, Showtime, actually made the end of year highlight reel on rival cable provider, HBO. This was unprecedented.

He next fought on June 5, 2005, against British boxer Ricky Hatton, Tszyu lost this fight and his world title by RTD (Referee technical decision) after retiring on his stool at the end of the 11th round. He was also behind on all three cards (by 1, 3 and 5 points).