This set comes with full professional motion menus with music, chaptered rounds, complete set in chronological order on 18 high quality DVDs. Includes premium cases and artwork printed on the DVDs.
Orders are carefully packaged in boxes with bubble wrap and shipped out within 24 hours by priority mail (2-3 days). Guaranteed.
Our competitors sell sets in paper sleeves without cases and without artwork printed on the DVDs. They do not make their own custom menus but illegally copy our menus. Please reward the site that spends all the hard time to make these beautiful sets and not the sites that just copy our work.

(Ratings are to compare sets on this web site only. You cannot compare ratings from one site to another because some sites are not honest and rate their sets higher than they should be.)
Price $24.95
ITEM # 1255p
Price $225.00
without artwork on DVDs
with artwork on DVDs + $18
ITEM # 1255 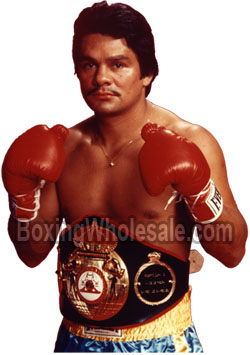 Vacating the lightweight title was a buildup for an attempt at the welterweight title. Duran earned a pair of wins against former WBC Welterweight Champion Carlos Palomino and Zeferino Gonzales, setting the stage for a title bout against then undefeated WBCV welterweight champion Sugar Ray Leonard. The Venue chosen was the Olympic Stadium in Montreal (the same location where Leonard won an Olympic gold medal during the 1976 Summer Olympics). Duran resented the fact that he was getting only one fight the money Leonard would make despite the fact that he was entering the bout with an incredible 71-1 record. On June 20, 1980, Duran captured the WBC Welterweight title by defeating Leonard via a 15 round unanimous decision (145-144, 148-147, 146-144). The fight became known as “The Brawl in Montreal.”

After defeating Leonard in Montreal, Duran gained iconic status in his home country, Panama. Leonard initiated the rematch clause and asked for the fight to be the following November. In their second fight, Leonard successfully changed his tactics, using more footwork and movement than he had in their first fight, and Duran was unable to get Leonard against the ropes. During the seventh round, after Leonard had gained a slight lead on the scorecards, he began taunting and mocking Duran. Halfway into the eight round, Duran suddenly stopped fighting, repeatedly saying, “No mas” (“no more”). In a 2016 interview, Duran claimed that what he actually said was, “No Sigo” (“I won’t go on).

He took some time to recover from that fight and gained even more weight to contend for the WBC Light Middleweight title, but losing in his first attempt at a championship in that division on January 30, 1982, against Wilfred Benitez by a 15 round unanimous decision, this after having defeated Nino Gonzalez and Luigi Minchillo, two rated light middleweights, both by ten round decisions in non-title bouts. Duran was also to lose his comeback fight in September 1982 in Detroit. Kirkland Laing, from London, shocked the boxing world, producing the type of display his talents promised yet he so rarely produced, taking the split decision. After being relegated to a 10 round walk out win over Englishman Jimmy Batten at The Battle of The Champions in Miami, Duran signed with promoter Bob Arum. This marked the beginning of a comeback in which he beat former world champion and now hall of famer Pipino Cuevas via a fourth round knockout, which earned him a second crack at the light middleweight title, this time against WBA Champion Davey Moore.

The WBA title bout took place at Madison Square Garden on June 16, 1983, which also happened to be Duran’s 32nd birthday. The still inexperienced Moore (12-0) was game through the first three rounds, but by the 4th, Duran said he knew Moore couldn’t hurt him, and an onslaught began. The pro-Duran crowd at ringside cheered as Duran relentlessly punished Moore. By the end of the sixth round, Moore’s eye had swollen shut and he was floored near the end of the seventh. Finally the fight was stopped in the eight round as Moore was taking such a horrific beating and Duran won his third world title. After the victory, Duran was hoisted up in the air as the crowd sang “Happy Birthday” to a sobbing Duran.