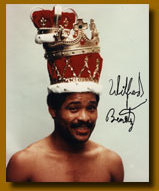 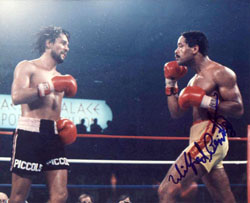 This set comes with full professional motion menus with music, chaptered rounds, complete set in chronological order on 10 high quality DVDs. Includes premium cases and artwork printed on the DVDs.
Orders are carefully packaged in boxes with bubble wrap and shipped out within 24 hours by priority mail (2-3 days). Guaranteed.
Our competitors sell sets in paper sleeves without cases and without artwork printed on the DVDs. They do not make their own custom menus but illegally copy our menus. Please reward the site that spends all the hard time to make these beautiful sets and not the sites that just copy our work.

1-800-659-3607
Testimonials
I hope that everyone is as pleased as I am. First off I have been longing to own the special Dempsey set ... When I saw it available on BoxingWholesale for the price that you have it for, I jumped high and fast and landed on solid ground. THANK YOU.
T. Robinson
Austin, TX
WILFRED BENITEZ 22 fights on 10 boxing DVDs
WILFRED BENITEZ 22 FIGHTS ON 10 BOXING DVDS
CONTACT US
HOME PAGE
TRILOGY DVDS
POKER
FREE SHIPPING
SPECIAL DVD SETS
PICK A FIGHT
BOXING SCHEDULE
PAY PER VIEW BOXING
Fights Boxing DVD 1
Wilfred Benitez vs Hafey
Wilfred Benitez vs Cervantes

(Ratings are to compare sets on this web site only. You cannot compare ratings from one site to another because some sites are not honest and rate their sets higher than they should be.)
Price $19.95
ITEM # 1025p
Price $195.00
without artwork on DVDs
with artwork on DVDs + $16
ITEM # 1025

Wilfred Benitez will always be the fifth member of a Fantastic Four. Benitez’s journey roared into the air only to plummet like a stalled plane. Today, the hands that made him one of the finest ring generals of all time can barely be clenched. The brain behind the magic has been ravaged by his trade.

The reason Benitez, born on September 12, 1958, is generally denied entry into the Leonard-Hagler-Hearns-Duran club is because he never shared a ring with “Marvellous” Marvin, thus making his membership incomplete.

But the application, that includes beating Duran, pushing Leonard to the brink, and being outpointed by Hearns, should never be discarded. Wilfred Benitez was an elegant artist of the ring, using each inch of the canvas to create fistic masterpieces. He claimed three world titles in different divisions, winning the first aged just 17.

But Benitez can’t remember his achievements. He doesn’t know he is now 55 years old. He can’t remember being interviewed by Boxing News in 1981 five years after claiming his first world title with a stunning victory over Antonio Cervantes.

“I don’t know,” Benitez said back then when the West Coast correspondent Steve Vender asked how long he would fight for. “Maybe Ill fight until I’m 40. But I want to make millions before I retire, Hundreds of millions.”

He nearly didn’t survive to be 40, much less fight until that young age. Wilfred, damaged by the onset of pugilistic dementia, was 38 when he collapsed on his mother’s living room floor and slipped into a coma.

Lying stricken when doctors arrived, his family were told to prepare for the worst. Six years after his final bout Benitez was in physical and mental dire straits. He survived the coma but his demise continues. He foght on for years past his peak, broke and desperate. The millions he earned had long gone; regaining them proved and enduring but impossible target.

But Vender witnessed a very different version of the Puerto Rican legend.

“One simply doesn’t watch Benitez when he moves; you study him,” wrote Vender 15 years before Wilfred collapsed. “Whether he is under pressure from one of his sparring partners in the ring, or simply sauntering down the hallway on the back to his room. Benitez is a man whose movement is so full of subtleties that to gain any hint of his mood or feelings you must study him like you would a clever and capable animal.”

To study Benitez today would be a depressing experience. He struggles to recognize his family, his careers. He cannot control his bodily functions. The port that made him a king has stripped him of his soul.

The passion for pugilism came from their father Gregorio Sr. “I married Clara Rosa (Wilfred’s mother) in 1947,” Gregorio explained in 1981. “We had a son he was going to be a fighter.”

All four of Gregario’s sons fulfilled their father’s wishes. His three elder brothers – Gregorio Jr., Frankie, and Alphonso all grew into professionals, but it was young Wilfred, who began fighting at the age of eight, who exhibited the most promise.

He turned pro at the age of 15 and within two years he was world champion.