1-800-659-3607
Testimonials
I just wanted to let you know how pleased I am with the product and with your amazing service. Your company was a real lifesaver, my son was so thrilled.
-C. Diaz
Oak Creek, CO
VIC DARCHINYAN 38 FIGHTS ON 15 BOXING DVDS
VIC DARCHINYAN 38 fights on 15 boxing DVDs
CONTACT US
HOME PAGE
TRILOGY DVDS
POKER
FREE SHIPPING
SPECIAL DVD SETS
PICK A FIGHT
BOXING SCHEDULE
PAY PER VIEW BOXING 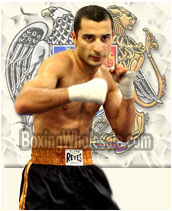 Bakhtang “Vic” Darchinyan (born 7 January 1976) is an Armenian professional boxer. He is a former world champion in two weight classes.

While retaining his WBC and WBA super flyweight belts, Darchinyan vacated his IBF belt in order to move up to bantamweight to fight IBF champion Joseph Agbeko in Sunrise, Florida on July 11, 2009. He lost a unanimous decision in a fight he looked almost too overly aggressive in and couldn’t seem to come with the Ghanan’s style and repeatedly walked into straight right hands. Agbeko spoiled Darchinyan’s goal of winning his third world title in a different division. Two judges scored the bout 114-113 for Agbeko, while the third had it for the Ghanaian Agbeko, 116-111. Despite the defeat at bantamweight, Darchinyan was still recognized as super flyweight champion by both the WBC and WBA.

In May 2010 Darchinyan won the vacant IBO bantamweight title with a one sided unanimous decision victory in his adopted land of Australia over Eric Barcelona. Barcelona was knocked down twice in the fifth round, once in the eleventh round and was docked a point in each the sixth and twelfth rounds.

Following the win, it was soon announced that Darchinyan would take part in Showtime’s four man bantamweight tournament along with Joseph Agbeko, Abner Mares and IBF bantamweight champion Yonnhy Perez. Vic lost in the semi-finals against Mexico’s Mares via controversial split decision. Darchinyan dominated Mares in first half of the fight. Mares was knocked down once in the second round and was docked a point in the fourth round for low blows. Mares had been throwing dirty punches the entrire fight, however, and continued to do so, being warned 16 more times after the point deduction. The referee continued to turn a blind eye to Mares’ low blows and, as a result, Mares started winning rounds. Darchinyan was knocked down once in the seventh round out of pain from low blows. When the win was announced for Mares, the audience seemed surprised, as many felt Darchinyan had won this fight.

In the consolation bout, Darchinyan rocked Perez in round one, knocked him down in round two and was in command all the way. Perez had his moments but wasn’t able to hold off Darchinyan’s aggression. The bout ended when Perez was cut by an accidental head butt at 1:07 of round five. Scores were 50-44 on all cards. Darchinyan dedicated his victory to the lives lost in the 1915 Armenian Genocide, as well as the Australians that perished in Anzac Day for the the following day. On April 24, one day after his fight, he joined thousands of Armenian Americans on the streets of Los Angeles in a march to commemorate the Genocide. Vic was later honored at the Armenian National Committee of America Annual Banquet on November 26. He was rated #1 contender by the WBA shortly after the fights.

In September, for a homecoming bout in Armenia, Vic battered tough African contender evans Mbamba (18-2, 9 KOs) for twelve one-sided rounds (Darchinyan won 120-107 on two cards and 119-107 on the third), maintaining the mandatory WBA #1 position and gaining WBO #1 spot shortly after. Mbamba was knocked down once in the first round.

On April 6, 2012, Darchinyan lost to WBC bantamweight champion Shinsuke Yamanaka in Yamanaka’s home country of Japan. The fight was not without controversy. Darchinyan was slightly ahead on one card and the other two were even after the fourth round. In the fourth, a clash of heads opened a bloody cut on Darchinyan’s eyebrow and nose. Yamanaka hit Darchinyan with an elbow on the same eyebrow in round five, severing the cut. The referee was not in line of sight to see this. Blood was pouring more rapidly out of Darchinyan’s eyebrow afterward and the ringside doctor examined it. A fight would usually be stopped and given a technical decision at this point.