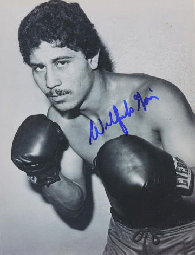 Complete set in chronological order on 6 high quality DVDs. Includes premium cases and artwork printed on the DVDs.
Orders are carefully packaged in boxes with bubble wrap and shipped out within 24 hours by priority mail (2-3 days). Guaranteed.
Our competitors sell sets in paper sleeves without cases and without artwork printed on the DVDs. They do not make their own custom menus but illegally copy our menus. Please reward the site that spends all the hard time to make these beautiful sets and not the sites that just copy our work.

1-800-659-3607
Testimonials
I would like to thank you for actually having the Rocky Marciano career set I purchased today. I have looked high and low for it with no luck, until today. You guys rule and I'm spreading the word about your site. Please keep it up!!
-J. Vega
Bismark, ND
WILFREDO GOMEZ 24 fights on 6 boxing DVDs
WILFREDO GOMEZ 24 FIGHTS ON 6 BOXING DVDS
CONTACT US
HOME PAGE
TRILOGY DVDS
POKER
FREE SHIPPING
SPECIAL DVD SETS
PICK A FIGHT
BOXING SCHEDULE
PAY PER VIEW BOXING

(Ratings are to compare sets on this web site only. You cannot compare ratings from one site to another because some sites are not honest and rate their sets higher than they should be.)
Price $19.95
ITEM # 1075p
Price $120.00
without artwork on DVDs
with artwork on DVDs + $13
ITEM # 1075

Hoping to get a rematch with Sanchez, Gomez went back to the super bantamweight division, where he got a dispence from the WBC to make tow preparation bouts before defending his title again. He did so and won two non-title bouts, both by knockout in the 2nd round, one over Jose Luis Soto who was a stablemate of Julio Cesar Chavez back in Culiacan, Mexico. Wins over future world champ Juan ‘Kid’ Meza, knocked out in six in Atlantic City, and Juan Antonio Lopez, knocked out in ten as part of the Larry Holmes vs Gerry Cooney undercard followed. But all chances of a rematch with Sanchez were dashed when Sanchez died in a car crash outside Mexico City the morning of August 12, 1982. Boxing fans across Latin America mourned the tragedy. Gomez, who was training to defend against Mexican Roberto Rubaldino only five days later, took a quick trip to Mexico to offer Sanchez flowers and then returned to Puerto Rico the same afternoon. He beat Rubaldino by knockout in 8 rounds and made one more title defense against the Mexican bantamweight world champ Lupe Pintor in the Carnival of Champions in New Orleans, winning by knockout in 14 rounds. The Pintor contest was the only time a Gomez fight was showcased on HBO, which at the time exclusively showcased the largest boxing fights, much like the Pay Per View system does currently.

By the time he was done with the Junior Featherweights, Gomez had established a division record of 17 defenses, and a world record of most defenses in a row by knockout, all his defenses finishing before the established distance limit.

He then re-tried winning the Featherweight title and this time, he achieved his dream, winning his second world title by dethroning Juan Laporte, a fellow Puerto Rican who had won the title left vacant after Sanchez died. He beat Laporte by a 12 round unanimous decision. This time, however, it did not last that long. Ahead on all scorecards, Gomez was the victim of a rally by Azumah Nelson of Ghana who knocked him out in 11 rounds in San Juan, December 8, 1984.

Gomez wanted either a rematch with Nelson or a shot at WBA and Lineal Junior Lightweight world champion Rocky Lockridge of New Jersey, whichever came first. Lockridge was first to offer Gomez a try, and the 2 battled a closely scored 15 round bout in San Juan, with Gomez being given a unanimous 15 round decision, which many experts have said Lockridge deserved, but also which in the opinion of most who saw it live, was a justified decision.

This reign also came to an end quick, Gomez being handed his 3rd loss at ht hands of young Alfredo Layne by knockout in 9 rounds. Layne lost the title in his own first defense to south Africa’s Brian Mitchell, and it became obvious Gomez’s best years had gone by, so he retired after this fight.

Gomez tried a comeback in 1988 and 1989, but after winning 2 more bouts by knockout, he realized boxing wasn’t in his heart anymore and retired for good. He later moved to Venezuela, where he ran into drug problems, causing him trouble with the law and spending some months in jail. He attended a rehabilitation center in Colombia. Gomez rebounded and is now back in Puerto Rico, where he has managed to stay off drugs. He helped Hector ‘Macho’ Camacho with the training of Camacho’s son Hector Camacho Jr., who is a boxer in the Jr. Welterweight division. In 1998, Gomez became a born-again Christian.
Wilfredo Gomez vs Silva
Wilfredo Gomez vs Sanchez
Wilfredo Gomez vs Soto