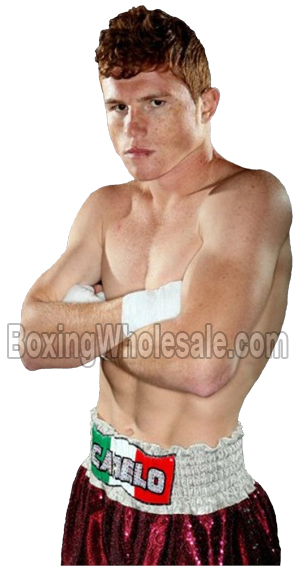 Saul Canelo Alvarez 20 Career Boxing Fights On 23 DVDs With Motion Menus
Overall Quality 10-10
(Ratings are to compare sets on this web site only. You cannot compare ratings from one site to another because some sites are not honest and rate their sets higher than they should be.)
SAUL CANELO ALVAREZ 20 FIGHTS ON 23 BOXING DVDS
This set comes with full professional motion menus with music, chaptered rounds, complete set in chronological order on 23 high quality DVDs. Includes premium cases and artwork printed on the DVDs.
Orders are carefully packaged in boxes with bubble wrap and shipped out within 24 hours by priority mail (2-3 days). Guaranteed.
Our competitors sell sets in paper sleeves without cases and without artwork printed on the DVDs. They do not make their own custom menus but illegally copy our menus. Please reward the site that spends all the hard time to make these beautiful sets and not the sites that just copy our work.
Fights Boxing DVD 1
Saul Canelo Alvarez vs J. Cotto
Saul Canelo Alvarez vs Baldomir
Price $19.95
ITEM # 1520p
Price $220.00
without artwork on DVDs
with artwork on DVDs + $28
ITEM # 1520

Santos Saul Alvarez Barragan (born July 18, 1990), best known as Saul “Canelo” Alvarez. As of December 2018, Alvarez is ranked as the world’s best active boxer, pound for pound, by BoxRec, third by The Ring and eighth by the Boxing Writers Association of America. He is also ranked as the world’s best active middleweight by BoxRec, and by the Transnational Boxing Rankings Board.

Alvarez is known as an excellent counterpuncher, being able to exploit openings in his opponents’ guards while avoiding punches with head and body movement. He is also known as a formidable body puncher.

Alvarez defeated Kermit Cintron in the 5th round by TKO. Alvarez spent the first three rounds feeling out Cintron, a former Welterweight Champion, before punishing the Puerto Rican with body shots and straight right hands in the fourth round. He knocked Cintron down once and had him in trouble at the end of the round, but Cintron was saved by the bell. In the fifth round, Cintron came out and caught Alvarez with some combinations, but Alvarez eventually overpowered him with sever powerful straight right hands, and the referee stepped in and stopped it. The fight averaged 1.5 million viewers on HBO: Boxing After Dark.

Richard Schaefer announced that Alvarez’s next bout on May 5, 2012, on the undercard of Miguel Cotto’s clash with Floyd Mayweather Jr. at the MGM Grand Garden Arena, and co-featured, on Cinco De Mayo. On February 11, Shane Mosley was announced as Alvarez’s next opponent in May for his WBC light middleweight title. Alvarez defeated Mosley after 12 rounds via unanimous decision.

Alvarez was originally set to fight Ring Top 10 super welterweight, and former welterweight Champion, Paul Williams on September 15, 2012. However, on May 27, 2012, a motorcycle accident in Georgia paralyed Williams from the waist down, ending his boxing career. Alvarez’s possible opponents for his September bout were James Kirkland, Austin Trout, Delvin Rodriguez and most notably, Victor Ortiz.

Alvarez was scheduled to defend his title against former welterweight titlist Victor Ortiz in the main event of a Showtime PPV card dubbed “Knockout Kings” from the MGM Grand Garden Arena. However, Ortiz was unable to defeat underdog Josesito Lopez in what was supposed to be a “tune-up” fight on June 23 at the Staples Center in Los Angeles, losing due to referee stoppage (broken jaw) and canceling his bout with Alvarez as a result.

Due to the upset, Lopez was instead penciled in to face Canelo at the MGM Grand on the September 15th date, to challenge for Sual’s WBC light middleweight title. Alvarez won the fight via fifth-round technical knockout after dominating Lopez from start to finish to stay undefeated and increase his record of 41-0. The fight averaged 1.04 million on Showtime. For the fight, Alvarez earned $2 million and Lopez a smaller amount of $212,500.

His next fight took place on April 20, 2013 at the Alamodome in San Antonio, Texas against Austin Trout. The fight was supposed to take place during Cinco de Mayo weekend as the co-main event of the Floyd Mayweather Jr. bout against Robert Guerrero; however, due to a contract disagreement between Alvarez and Mayweather regarding their potential fight on September 14, 2013, Alvarez opted to headline his own card.