Complete set in chronological order on 14 high quality DVDs. Includes premium cases and artwork printed on the DVDs.
Orders are carefully packaged in boxes with bubble wrap and shipped out within 24 hours by priority mail (2-3 days). Guaranteed.
Our competitors sell sets in paper sleeves without cases and without artwork printed on the DVDs. They do not make their own custom menus but illegally copy our menus. Please reward the site that spends all the hard time to make these beautiful sets and not the sites that just copy our work.

(Ratings are to compare sets on this web site only. You cannot compare ratings from one site to another because some sites are not honest and rate their sets higher than they should be.)
Price $19.95
ITEM # 885p
Price $280.00
without artwork on DVDs
with artwork on DVDs + $18
ITEM # 885 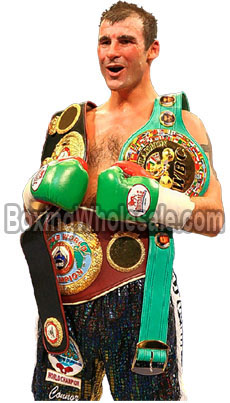 Joseph William Calzaghe (born 23 March 1972) After Collins retired, a fight against British boxing legend Chris Eubank was quickly set up for the vacant WBO title on October 11, 1997, in Sheffield. Calzaghe emerged victorious over the two time WBO champion, knocking the granite chinned Eubank down in the opening seconds and claiming a unanimous points win. The judges scored the contest 118-110, 118-109, and 116-111 in favor of Calzaghe. Eubank said of Calzaghe in a 2006 interview that: “Joe is the proper article, a true warrior.” Calzaghe conceded that Eubank, even in his comeback, gave him the toughest fight of his life.

In 1998 he defended his title against Branko Sobot (winning by technical knockout in 3 rounds). Sobot was a late replacement for Syrian-American Tarick Salmaci, who pulled out after a row with his management. Sobot was knocked down in the third round, he beat the count but immediately came under renewed punishment from Calzaghe, forcing the referee to step in at 1:35 of the third round.

Calzaghe then went on to defeat perennial contender Juan Carlos Gimenez Ferreyra (TKO in 10 rounds), a former opponent of both Nigel Benn and Chris Eubank.

In 1999, Calzaghe started out by fighting his domestic rival, Robin Reid. Calzaghe was bitter that Reid refused to face him whilst holding the WBC Championship in a unification bout and vowed to beat him. After twelve rounds, the judges scored the fight for Calzaghe via a spit decision. Reid was never given the opportunity of a rematch. Calzaghe damaged his hand early on in the fight and according to Calzaghe, he suffered a dose of food poisoning. Calzaghe finished the year with another points win against Australian Rick Thornberry, where he again injured his hand after looking like overwhelming his opponent early.

2000 started with another points decision against fellow Briton David Starie. This was followed by wins against Omar Sheika (who was coming off a win over Glenn Johnson) by fifth round stoppage, and former WBC world champion and close friend Richie Woodhall in ten rounds.

2001 wtarted with an impressive first round stoppage win over the unbeaten German No 1 contender Mario Veit (30-0), followed by a win against American contender Will McIntyre on the Mike Tyson-Brian Nielsen undercard in Copenhagen Denmark, marking his first defence outside Britain. Calzaghe dropped him in the third round with a ferocious left uppercut, although McIntyre managed  to survive the count. But the end was near, Calzaghe dropped McIntyre again at the start of the fourth and this time the referee stopped proceedings.