Complete set in chronological order on 8 high quality DVDs. Includes premium cases and artwork printed on the DVDs.
Orders are carefully packaged in boxes with bubble wrap and shipped out within 24 hours by priority mail (2-3 days). Guaranteed.
Our competitors sell sets in paper sleeves without cases and without artwork printed on the DVDs. They do not make their own custom menus but illegally copy our menus. Please reward the site that spends all the hard time to make these beautiful sets and not the sites that just copy our work.

1-800-659-3607
Testimonials
Thank you so much for sending my order so quickly. I still can't believe I received it ony 2 days after I ordered it... I will definitely be ordering from you again.
-T. Wright
Fort Smith, AR
NIKOLAI VALUEV 21 FIGHTS ON 8 BOXING DVDS
NIKOLAI VALUEV 21 fights on 8 boxing DVDs
CONTACT US
HOME PAGE
TRILOGY DVDS
POKER
FREE SHIPPING
SPECIAL DVD SETS
PICK A FIGHT
BOXING SCHEDULE
PAY PER VIEW BOXING 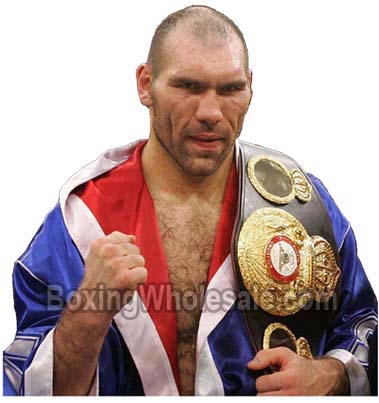 Nikolai Valuev 21 Career Boxing Fights On 8 DVDs With Menus
Overall Quality 7.5-10
(Ratings are to compare sets on this web site only. You cannot compare ratings from one site to another because some sites are not honest and rate their sets higher than they should be.)

Nikolai Sergeyvich Valuev (born August 21, 1973) is a Russian Politician and former professional boxer. In boxing, he competed from 1993 to 2009, and held the WBA Heavyweight title twice between 2005 and 2009. Standing at a height of 7.0 ft and a peak weight of 328 lb, Valuev is best known for being the tallest and heaviest world champion in boxing history.

Valuev’s first title defense of his second reighn as WBA Champion was against the 46 year old, four time heavyweight champion of the world, Evander Holyfield, on 20 December 2008. Before the match, Valuev weighted 310.8 pounds, nearly 100 pounds heavier than Holyfield at 214.3 pounds. After a rather uneventful match with no knockdowns and few punches thrown by either fighter, Valuev won a widely disputed majority decision. In response to the controversial result the WBA announced plans to investigate the decision.

Retirement from boxing and health problems

Valuev announced his retirement from boxing in a Russian newspaper three days after the loss to Haye on 10 November 2009.

In 2010, Valuev’s doctor went on record saying that he is treating Valuev for “serious bone and joint problems”. Valuev underwent two operations that required at least six months on the sidelines.

Valuev confirmed in 2013 that medical advice was one of the reasons he is not planning to make a comeback in boxing.

Valuev is one of five heavyweight champions to have retired without having suffered a stoppage loss during his career. The others are Gene Tunney, Rocky Marciano, Riddick Bowe and Sultan Ibragimov.

Life outside of boxing

Valuev’s first role in a film was a cameo appearance in the German film 7 Zwerge – Der Wald ist nicht genug in 2006. In 2008, Valuev played the main role in the film Stonehead by Philip Yankovskiy, playing an ex-boxer who lost his memory. The film took the main prize at the film festival “Window to Europe. After the success of stonehead, it was announced Valuev is being filmed in two new films at the same time.

Valuev has participated in several photo and video advertisements of various products and services. In November 2009, he signed a promotional contract with a German sausage manufacturer, making Valuev the face of the company’s advertisement campaign for five years. Nikolai Valuev is also planning to open a family restaurant in Germany. In August 2010, Valuev signed a promotional contract with the Pokerstars poker portal.

Valuev’s distinctive appearance and fame have occasionally attracted the use of his images in advertising without his permission. In particular, a Penza-located theatre, which for some time before a movie showing, had an ad where Valuev acts as a man who punished the audience disturbing others.