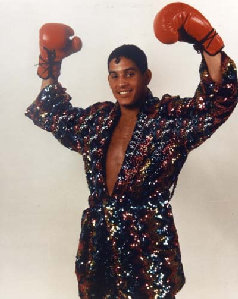 Complete set in chronological order on 17 high quality DVDs. Includes premium cases and artwork printed on the DVDs.
Orders are carefully packaged in boxes with bubble wrap and shipped out within 24 hours by priority mail (2-3 days). Guaranteed.
Our competitors sell sets in paper sleeves without cases and without artwork printed on the DVDs. They do not make their own custom menus but illegally copy our menus. Please reward the site that spends all the hard time to make these beautiful sets and not the sites that just copy our work.

1-800-659-3607
Testimonials
WOW, I ordered a set a little before I went on vacation (my first order from here) and I didn't expect to get it before vacation. It came in three days and we didn't have to pay extra.
-O. Butler
Cookville, TN
HECTOR CAMACHO 45 FIGHTS ON 17 BOXING DVDS
HECTOR CAMACHO 45 fights on 17 boxing DVDs
CONTACT US
HOME PAGE
TRILOGY DVDS
POKER
FREE SHIPPING
SPECIAL DVD SETS
PICK A FIGHT
BOXING SCHEDULE
PAY PER VIEW BOXING

(Ratings are to compare sets on this web site only. You cannot compare ratings from one site to another because some sites are not honest and rate their sets higher than they should be.)
Price $19.95
ITEM # 545p
Price $240.00
without artwork on DVDs
with artwork on DVDs + $23
ITEM # 545

Hector Camacho (24 May, 1962 – 24 November 2012), commonly known by his nickname “Macho” Camacho. After a stellar amateur career, Camacho began a quick rise through the professional rankings, first in the featherweight and then in the junior lightweight division. He was so confident that he claimed he could beat world featherweight champions Salvador Sanchez and Eusebio Pedroza. However, Sanchez died while Camacho was still coming up in the ranks. In the junior lightweight division, he defeated the top contender Irleis Cubaniot Perez, Melvin Paul, John Montes, and Refugio Rojas.

When the World Junior Lightweight champion, Bobby Chacon, refused to go to Puerto Rico to defend his title against Camacho, the World Boxing Council (WBC) declared the world championship vacant. Rafael Limon, who had been defeated and lost the championship to Chacon, fought him for the vacant title. It was the first time Camacho was in a ring with a former world champion; he scored knockdowns on Limon in the first and third rounds before the referee stopped the fight in the fifth round.

Camacho also fought his first defense in San Juan, where he met Rafael Solis, a fellow Puerto Rican. Camacho got tested in this fight for the first time, and was shaken in round three by a Solis uppercut. He knocked out Solis with a right to the chin in round five, and retained the title.

Moving up to lightweight, Camacho won the United States Boxing Association title against Roque Montoya with a twelve round decision. His victory in the next fight, broadcast on Home Box Office (HBO), made him a two time world champion. Camacho beat the Mexican defending world champion, Jose Luis Ramirez in Las Vegas to win the WBC world Lightweight championship. Camacho dropped Ramirez in round three and won the fight by a unanimous twelve round decision.

The two other reigning world champions in his division at that time, Livingstone Bramble and Jimmy Paul, were reluctant to unify the crown with Camacho. Instead, he beat Freddie roach before his next fight of importance came along, ten months after beating Ramirez.

He med Edwin Rosario on June 13, 1986, at Madison square Garden in New York City, a bout also broadcast on HBO. The fight was notable for the shifts of dominance between the men. Camacho dominated rounds one to four, but had to hang on in rounds five, six and seven, when he felt Roario’s power. He came back to take rounds eight and nine, but Rosario came back to take the last three rounds. It was a close fight, but Camacho retained the title by a split decision of the judges.

Camacho retained his title against Cornelius Boza Edwards, a former world junior lightweight champion, in Miami in a unanimous decision, after dropping Edwards in the first round.

He went up in weight and competed at the next level. After a few fights there, he met Ray “Boom Boom” Mancini, the former world lightweight champion who had a record of 29-3 with 23 knockouts, for the vacant WBO Light Welterweight title. Camacho was the fresher of the two and won a split twelve round decision. He joined that exclusive group of world champion boxers who have become world champions in three weight divisions.