Complete set in chronological order on 4 high quality DVDs. Includes premium cases and artwork printed on the DVDs.
Orders are carefully packaged in boxes with bubble wrap and shipped out within 24 hours by priority mail (2-3 days). Guaranteed.
Our competitors sell sets in paper sleeves without cases and without artwork printed on the DVDs. They do not make their own custom menus but illegally copy our menus. Please reward the site that spends all the hard time to make these beautiful sets and not the sites that just copy our work.

(Ratings are to compare sets on this web site only. You cannot compare ratings from one site to another because some sites are not honest and rate their sets higher than they should be.)
Price $17.95
ITEM # 760p
Price $80.00
without artwork on DVDs
with artwork on DVDs + $12
ITEM # 760 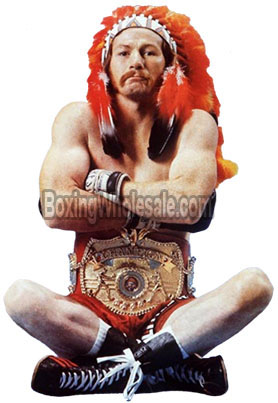 Danny “Little Red” Lopez (born 6 July, 1952) known for his tremendous punching power, The Ring magazine rated Lopez at number 26 on their list of “100 Greatest Puncher”. In 2010, Lopez was inducted into the International Boxing Hall of Fame.

His fight on March 10 of 1979 against Spain’s Roberto Castanon in Salt Lake City, not only marked the first time he defended his world title in his home state, but the first time he fought in his home state as a professional period. He retained the crown with a tow round knockout. Then, on June 17, at San Antonio, Lopez and Mike Ayala fought what boxing book The Ring: Boxing in the 20th Century called one of the best fights of 1979. Lopez retained the title with a 15th round knockout, but the fight was marred by the finding afterwards that Ayala had been fighting under the influence of drugs. Nevertheless, this did not affect the fight’s result, but left many to speculate about how the fight would have ended had Ayala not been drugged during it. Ayala himself admitted to have been, his own words, loaded on the day of the fight.

Lopez went on to defend the title once more that year, knocking out Jose Caba in three rounds.

Lopez’s reign as world champion came to an end on February 2, 1980, at the Arizona Veterans Memorial Coliseum in Phoenix. He met Salvador Sanchez that day, and he lost by knockout in round 13 in a one sided affair. A rematch was fought on June 21, in Las Vegas, and that time around, Lopez was knocked out in the 14th round, in a replay of the first fight. He announced his retirement after that fight.

Lopez was the World featherweight Boxing Champion from November 13, 1976 to February 2, 1980. Lopez was born in Utah, but raised in Los Angeles, California. He was the younger brother of world welterweight contender Ernie “Indian Red” Lopez. “Little Red” began his pro boxing career on May 27, 1971 by knocking out Stevie Flajole in one round. Lopez went on to win his first 21 fights by knockout. After such an impressive start, Danny suddenly found himself in a terrible slump; losing to Bobby Chacon, Shig Fukuyama, and Octavio Gomez. However, Lopez went back to the gym, re-evaluated his career and launched a comeback. After knocking out champions Chucho Castillo, Ruben Olivares, and sean O’Grady, Lopez captured the WBC World Featherweight Title by decisioning David Kotey in 15 rounds. Danny Lopez went on to make 8 successful title defenses. Following back-to-back knockout defeats to Salvador Sanchez, Lopez retired in 1980. He worked as an actor and in the construction business. Inspired by George Foreman’s comeback to boxing after a 10 year retirement, Danny Lopez embarked on an ill-advised comeback of his own. On February 27, 1992, after 12 years away from the ring Lopez launched an unsuccessful comeback; being knocked out in 2 rounds by Jorge Rodriguez in Irvine, California.

Lopez has remained active during his latest retirement on the social sphere: He has been the object of various dedications and been active on the autograph signing circuit. He returned to live in Utah full time after stepping away from the boxing ring for the last time, then moved to Los Angeles, where he works as a construction worker. Today he lives in Chino Hills, California.