1-800-659-3607
Testimonials
WOW, I ordered a set a little before I went on vacation (my first order from here) and I didn't expect to get it before vacation. It came in three days and we didn't have to pay extra.
-O. Butler
Cookville, TN
JORGE PAEZ 48 FIGHTS ON 15 BOXING DVDS
JORGE PAEZ 48 fights on 15 boxing DVDs
CONTACT US
HOME PAGE
TRILOGY DVDS
POKER
FREE SHIPPING
SPECIAL DVD SETS
PICK A FIGHT
BOXING SCHEDULE
PAY PER VIEW BOXING

(Ratings are to compare sets on this web site only. You cannot compare ratings from one site to another because some sites are not honest and rate their sets higher than they should be.)
CAREER DVD SETS
1-800-659-3607 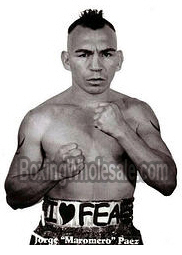 Jorge Adolfo Paez (born 27 October, 1965) Jorge was one of the most colorful characters of the 1980s into the ‘90s. His flamboyant and eccentric behavior endeared him to boxing fans during his near-20 year career that yielded two major titles at featherweight.

Paez was born in Mexicali, Mexico, on October 27, 1965, the son of a 1950s’era boxer. When his parents separated, he was raised by his grandmother, who owned the Circus Olvera.

“I’ve been performing ever since I was born,” Paez told RingTV.com through Brandon Ayala. “I was an acrobat, cyclist, a clown. I was everything.”

As a youngster Paez fought on the streets. His grandmother gave him some advice, “If you’re going to fight, why don’t you get paid for it?”

Paez went up against WBA super featherweight champion Genaro Hernandez in a non-title bout, losing by TKO in the 8th round due to cuts. On August 17, 1996, he won the WBC Continental Americas super featherweight regional title by knocking out Narciso Valenzuela in 3 rounds. Paez ould then lose that title in his next match against Julian Wheeler but regained it by beating Wheeler in the rematch.

On August 7, 1997, he lost by a knockout in eight rounds to angel Manfredy. After three victories, Paez lost via a devastating one-punch knockout in seven rounds to Augie Sanchez in May 1999. In his next bout in October 1999, Paez boxed future lightweight champion Jose Luis Castillo, losing by KO in the fifth round.

Paez continued to box on over the next few years, winning a long string of bouts against a lower level of opposition.

Paez was supposed to fight Jesus Chavez on March 29, 2003. However, it was discovered that Paez suffered from brain swelling, putting the fight with Jesus Chavez and his career in serious jeopardy. Despite these findings, Paez fought on, and on December 5, 2003, in Phoenix, Arizona, he defeated Scott McCraken by a ten-round spit decision in what would be Paez’s final match.

In 1993 he made the movie Zapatos Viejos, where he starred alongside Goria Trevi, Playing “Ernesto”. In 1995, he made his Hollywood acting debut in the low-budget movie Dirty Money.

Paez’s name surfaced in the 2004 FBI investigation against promoter Bob Arum. The FBI was investigating whether Paez’s win over Verdell Smith was a fixed fight or not.

Paez had a brief supporting role with World Wrestling Entertainment as an associate of Rey Mysterio, and accompanied him to the ring at the No Way Out pay-per-view event on February 15, 2004. Paez also appeared in Mysterio’s music video for his song from the WWE Originals album, “Crossing Border.”