(Ratings are to compare sets on this web site only. You cannot compare ratings from one site to another because some sites are not honest and rate their sets higher than they should be.)
Price $14.95
ITEM # 865p
Price $100.00
without artwork on DVDs
with artwork on DVDs + $15
ITEM # 865 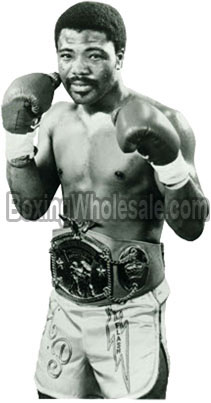 In 1982, the Boxing Writers Association of America named Pryor as their Fighter of the Year. Pryor was inducted into the International Boxing Hall of Fame in 199, and in 1999 was voted by the Associated Press as the world's best light welterweight of the 20th century. In 2002, he was ranked as the 35th greatest boxer of the past 80 years by The Ring.

Pryor was best known for his two knockout victories against the great Alexis Arguello. Pryor however, had a career about more than just those two famous fights.

A superb puncher with speed and skills, Pryor had a standout amateur career highlighted by a win against all-time great Thomas Hearns in the 1976 National Golden Gloves finals.

Pryor had just missed the chance to represent his country at the 1976 Olympics in Montreal and instead was on the team as a back-up, and no doubt he watched Howard Davis Jr. and Sugar Ray Leonard win gold medals with a gnawing sense that it should have been him up there defeating the Cubans and Russians.

Born in Cincinnati in 1955, Pryor was managed by Cincinnati businessman Buddy LaRosa, who made a fortune as a pizza restaurant owner. Fighting primarily in Cincinnati and the surrounding region, Pryor raced to a 24-0 record by mid 1980. Then he got a shot at 140 pound world champion Antonio Cervantes.

For the legendary Colombian, it was a huge mistake, he never stood a chance. Pryor took full advantage of the opportunity, unleashing all of his pent up rage and overwhelming the veteran. He went on to stop Cervantes in the fourth round to win the WBA version of the junior welterweight world title.

Pryor signed to face Sugar Ray Leonard for the undisputed welterweight championship in the fall of 1982 for $750,000. But before fighting Pryor, Leonard first has to defend his title against Roger Stafford in Buffalo, New York, on May 14, 1982. The Sunday before that bout, Pryor was driving to Buffalo from his Cincinnai home to taunt Leonard and hype their planned bout. Pryor heard on his car radio the news that Leonard had suffered a detached retina in his left eye and the fight was off. "I pulled off to the side of the road and I cried," Pryor said. Leonard retired six months later.

In March 1984, Pryor announced that he was going to fight again. "I never really retired. I just rested," Pryor said. "I vacated the title because the WBA insisted I defend it every six months." The newly formed IBF immediately recognized him as their world champion.

Shortly before Pryor made his comeback, his proposed multimillion dollar fight with WBA lightweight champion Ray Mancini fell through when Mancini was knocked out by Livingstone Bramble on June 1, 1984. "Aaron Pryor actually cried," said Bob Arum. "I saw tears."