This set comes with full professional motion menus with music, chaptered rounds, complete set in chronological order on 4 high quality DVDs. Includes premium cases and artwork printed on the DVDs.
Orders are carefully packaged in boxes with bubble wrap and shipped out within 24 hours by priority mail (2-3 days). Guaranteed.
Our competitors sell sets in paper sleeves without cases and without artwork printed on the DVDs. They do not make their own custom menus but illegally copy our menus. Please reward the site that spends all the hard time to make these beautiful sets and not the sites that just copy our work. 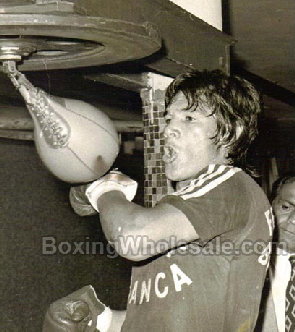 (Ratings are to compare sets on this web site only. You cannot compare ratings from one site to another because some sites are not honest and rate their sets higher than they should be.)
Price $13.95
ITEM # 1015p
Price $80.00
without artwork on DVDs
with artwork on DVDs + $16
ITEM # 1015

Carlos Monzon (August 7, 1942 - January 8, 1995) was an Argentine boxer who held the world middleweight title for seven years, during which he made a then-division record of 14 title defenses.

Nickname "Escopeta" (Shotgun), Monzon was adored all over Argentina during his unprecedented middleweight championship run, despite being accused of domestic violence and beating up the paparazzi who hounded him. His glamorous and violent life was avidly followed by the media, culminating with his trial for the killing of his second wife and his later death in a car crash.

Monzon retired from boxing as a champion at the top of his game. However, his personal problems continued and he was convicted of killing his wife in 1989. sentenced to 11 years in jail, he died in a car crash during a weekend furlough in 1995. He is considered by boxing critics to have been one of the greatest middleweights in history.

Monzon was born in poverty in the slums of the city of Santa Fe the capital of the province of the same name in Argentina. Coming from a poor background and a difficult childhood, he harbored a deep anger, coupled with the fighting instincts of a society steeped in the culture of machismo. Having learned early that he loved to fight, Monzon was discovered by trainer Amilcar Brusa while hanging around the Luna Park, a famous 8,000-seat arena in Argentinean capital of Buenos Aires.

At the start to his professional career, Monzon did not exhibit particularly great talent. On May 19, 1965, he won his first bout on points, against Anibal Codoba in Buenos Aires. In his first 20 bouts he won 14, lost three, and drew three more. However, he kept progressing against local foes and ultimately built an impressive record, since most of his opposition in his record was local, however, he was not given much credit by critics, who saw him as simply one more decent middleweight who could fight 10-round bouts. Monzon's aloof personality combined with a somewhat listless ring style, kept him fighting in Argentinean and Brazilian contests, almost exclusively against second'rate opponents. finally, after racking up an impressive 50 straight victories, Monzon earned a number-ten world ranking in 1970 and was given a title shot.

In taking the world middleweight title by knocking out Benvenuti on November 7, 1970, Monzon shocked the boxing world. Monzon applied pressure from the start, then, in the twelfth round he landed a right hand perfectly on Benvenuti's chin, and the title changed hands. Monzon also beat Benevenuti in a rematch, this time in only three rounds in Monte Carlo, as Benevenuti's seconds threw in the towel.

In 1971, Monzon became only the second man to stop former three-time world champion Emile Griffith, beating him in 14 rounds. Before the rematch with Griffith, Monzon had difficulty getting down to middleweight limit and was forced to spar three rounds and run three miles in order to make the weight. He as nevertheless able to out-point Griffith over 15 rounds in a close fight. Monzon then scored a win over tough Philadelphian Bennie Briscoe, overcoming a shaky ninth round, in which Briscoe almost scored a knockout. He followed this with a knockout if five rounds over European champion Tom bogs, a knockout in seven over welterweight champion Jose Matequilla Napoles, and a ten-round knockout of tough Tony Licata of New Orleans at Madison square Gardens. The latter fight would be Monzon's only fight in the United States.