Complete set in chronological order on 3 high quality DVDs. Includes premium cases and artwork printed on the DVDs.
Orders are carefully packaged in boxes with bubble wrap and shipped out within 24 hours by priority mail (2-3 days). Guaranteed.
Our competitors sell sets in paper sleeves without cases and without artwork printed on the DVDs. They do not make their own custom menus but illegally copy our menus. Please reward the site that spends all the hard time to make these beautiful sets and not the sites that just copy our work.

(Ratings are to compare sets on this web site only. You cannot compare ratings from one site to another because some sites are not honest and rate their sets higher than they should be.)
Price $13.95
ITEM # 425p
Price $60.00
without artwork on DVDs
with artwork on DVDs + $14
ITEM # 425 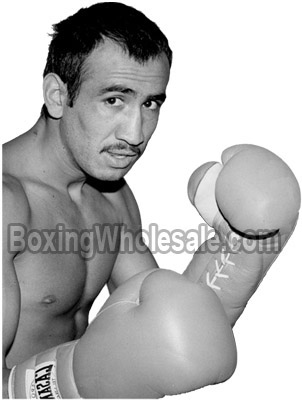 Carlos Zarate Serna (born May 23, 1951) is a Mexican former professional boxer who competed from 1970 to 1988, and held the WBC bantamweight title from 1976 to 1979. He and fellow Mexican and world Bantamweight champion Ruben Olivares have the distinction of being the only two professional boxers in history to put together two streaks of 20 or more knockout wins in a row.

Zarate was voted Fighter of the Year by The Ring magazine in 1977. Zarate was ranked #21 in The Ring's list of 100 greatest punchers of all time, and voted as the #1 bantamweight (along with Ruben Olivares) of the 20th century by the Associated Press in 1999. In 1994, Zarate was inducted into the International Boxing Hall of Fame. He is also the father of once-defeated Light Welterweight prospect, Carlos Zarate Jr.

One of the most prolific punchers of the 1970s, the long and lean Zarate possessed an uncanny power that rendered 58 of his 65 opponents unconscious. He turned pro in Cuernavaca, Mexico, in 1970 and reeled off 18 straight wins by knockout until Victor Ramirez took him the 10-round limit. Immediately after that fight he began another knockout streak that would continue until 1978.

Upholding the tradition of fine Mexican bantamweight champions, Zarate won the WBC 118-pound title in 1976 with a ninth-round knockout of Rodolfo Martinez. Zarate defended the title by scoring knockouts over Paul Ferreri, Waruinge Nakayama and Fernando Cabanela to set up, perhaps, the biggest bantamweight fight in history.

A unification match between Zarate and WBA champ Alfonso Zamora was set for 1977 at the Great Western Forum in Ingelwood, California. It was a fight fan's dream. Zamora was 19-0 with 29 knockouts while Zarate was 40-0 with 39 knockouts. But oddly, the WBC and WBA refused to sanction the bout, meaning Zarate and Zamora would fight only for bragging rights of Mexico. That was motivation enough for both men.

Zarate kept his long jab busy to offset Zamora's power early in the fight. But by round four, Zarate found a home for his right hand. He dropped Zamora twice and the bout was halted with Zarate claiming the unofficial, undisputed bantamweight rown. The win earned him "Fighter of the Year" honors from Ring magazine.

He would score five more title-fight knockouts before moving up to the super bantamweight division to challenge WBC champ and future Hall of Famer Wilfredo Gomez. Gomez as too strong for Zarate and scored a fifth-round TKO.

Zarate returned to the bantamweight division and retained his title by knocking out Mensah Kpalongo. But in his next title defense, on June 3, 1979, he lost a controversial split decision to fellow Mexican Lupe Pintor.

A disappointing Zarate retired after the Pinto fight but launched a comeback in 1986. He reeled off 12 consecutive wins before a technical loss to WBC super bantamweight champ Jeff Fenech in Australia. In 1988, he challenged Daniel Zaragoza for the same WBC title but was stopped in the 10th round.