(Ratings are to compare sets on this web site only. You cannot compare ratings from one site to another because some sites are not honest and rate their sets higher than they should be.)
CAREER DVD SETS
1-800-659-3607
ADRIEN BRONER 17 FIGHTS ON 13 BOXING DVDS 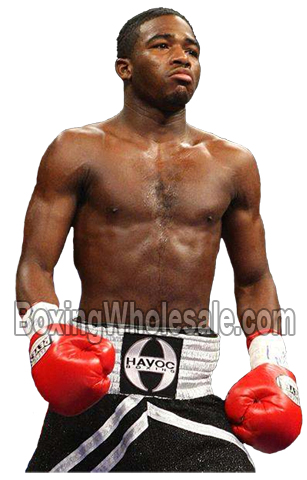 This set comes with full professional motion menus with music, chaptered, complete set in chronological order on 13 high quality DVDs. Includes premium cases and artwork printed on the DVDs.
Orders are carefully packaged in boxes with bubble wrap and shipped out within 24 hours by priority mail (2-3 days). Guaranteed.
Our competitors sell sets in paper sleeves without cases and without artwork printed on the DVDs. They do not make their own custom menus but illegally copy our menus. Please reward the site that spends all the hard time to make these beautiful sets and not the sites that just copy our work.
Price $19.95
ITEM # 1505p
Price $200.00
without artwork on DVDs
with artwork on DVDs + $18
ITEM # 1505

Broner turned professional on May 31, 2008, and scored three consecutive first-round knockouts against Allante Davis, David Warren Huffman, and Ramon Flores. In Broner's fourth fight he faced Terrance Jett at the MGM Grand in Las Vegas on the undercard of the Ricky Hatton vs Paulie Malignaggi fight. Broner defeated Jett with a stoppage in the sixth round. In Broner's fifth professional fight and final of 2008, he faced Eric Ricker with a no-contest decision.

In January 2009, was forced to go the distance with Jose Alfredo Lugo, at the Staples Center on the undercard of Shane Mosley vs Antonio Margarito. Broner returned to the ring in March scoring a unanimous decision over Eric Ricker. Three weeks later Broner stopped Angel Rodriguez in the fourth round. In his eighth fight, Broner stepped up to the eight rounds in a hard-fought fight with Fernando Quintero, pulling out a controversial majority decision  victory in a fight that Quintero took on 4 days' notice. In June at the Staples Center Broner met Australian William Kickett, scoring a sixth-round knockout. On the Juan Diaz vs Paul Malignaggi undercard in Houston Broner made short work of Edgar Portillo, victory coming via stoppage in the first round. Broner defeated Henry White Jr via KO in September and finished his busy year against Tommy Atencio. Broner stopped Atencio in the first round, for the sixth time in thirteen fights. Broner then had a fourth round stoppage victory over Roberto Acevedo. Broner fought 4 more times in 2010 against Rafael Lora, Carlos Claudio, Guillermo Sanchez, and Ilido Julio, stopping all of them.

Broner's next fight was on HBO's Boxing After Dark show from Guadalajara, Mexico, Broner took on Top 10 Super Featherweight contender Jason Litzau in a fight scheduled for ten rounds. Broner landed combos on the ropes late in the first, with a straight right, left hook and then a right uppercut hurting the Minnesotan badly. He crumpled, and the ref leaped in seeing he was out. The official end came at 2:58 of the first round.