This set comes with full professional motion menus with music, chaptered rounds, complete set in chronological order on 13 high quality DVDs. Includes premium cases and artwork printed on the DVDs.
Orders are carefully packaged in boxes with bubble wrap and shipped out within 24 hours by priority mail (2-3 days). Guaranteed.
Our competitors sell sets in paper sleeves without cases and without artwork printed on the DVDs. They do not make their own custom menus but illegally copy our menus. Please reward the site that spends all the hard time to make these beautiful sets and not the sites that just copy our work.

1-800-659-3607
Testimonials
I appreciate the service that I received from you guys... I found a new place to shop for my boxing fights. Thank you very much!!!
M. Grant,
Billings, MT
ANDRE BERTO 28 fights on 13 boxing DVDs 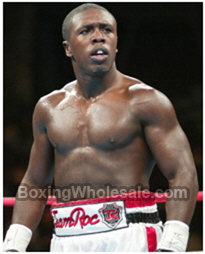 (Ratings are to compare sets on this web site only. You cannot compare ratings from one site to another because some sites are not honest and rate their sets higher than they should be.)
Price $19.95
ITEM # 1480p
Price $260.00
without artwork on DVDs
with artwork on DVDs + $18
ITEM # 1480

Andre Michael Berto (born September 7, 1983) is a professional boxer who holds dual American and Haitian citizenship. He is a two-time former welterweight world champion, having held the WBC and IBG titles between 2008 and 2011, as well as the WBA interim title in 2015. As an amateur he won the National Golden Gloves tournament in 2001 (at light middleweight) and 2003 (welterweight), and would represent the U.S. at the 2003 World Championships, winning a welterweight bronze medal. He also represented Haiti at the 2004 Olympics, reaching the opening round of the welterweight bracket.

Since his professional debut in 2004, Berto has become known for his toughness, formidable punching power, and fast hand speed. In the late 2000's he was considered a rising star in the welterweight division, as well as a highly regarded young prospect in boxing. He reached the peak of his career in 2011, holding the WBC welterweight title which he had won in 2008 and made five defenses and was ranked as the world's third best welterweight, behind the then-top stars Manny Pacquiao and Floyd Mayweather Jr.

Berto's success was cut short after his first career loss to Victor Ortiz in 2011, which won Fight of the Year honors by The Ring magazine. Since then, Berto's career has fluctuated: from 2012 to 2015 he suffered three further losses, but bounced back in 2016 with a win over Ortiz in a rematch.

On September 3, 2011, Berto returned after his defeat to Victor Ortiz to face IBF welterweight champion and Ring Top 10 welterweight Dejan Zavec. After 5 rounds of a closely competitive fight, Zaveck's corner stopped the fight as he had been cut. The two men embraced and Berto thanked the Slovenian fans for traveling over to America to cheer their countryman on. Berto called his performance "so-so," becoming a two-time world champion and the new IBF welterweight champion.

Berto relinquished his IBF welterweight title rather than face mandatory challenger Randall Bailey in order to facilitate the rematch with Ortiz because he wanted the opportunity to avenge his only defeat (at the time).

After testing positive for a banned substance, the rematch against Oritz planned for June 23, 2012 was cancelled. It has since been ruled that Berto's positive test was the result of contamination, and Berto regained his boxing license. Josesito Lopez replaced Berto and fought Oritz on the scheduled date at the Staples Center in Los Angeles. Lopez stopped Ortiz after 9 rounds claiming the vacant WBC silver welterweight title.
Andre Berto vs Robinson
Andre Berto vs Benjamn
Andre Berto vs Galvan
Andre Berto vs Neal

Berto's next fight was scheduled for November 24, 2012, in Ontario, California. The opponent was Ring Top 10 welterweight and WBC Interim welterweight champion Robert Guerrero. Berto was knocked down twice early in the fight but came back well to give Guerrero a tough scrap, but Guerrero managed to narrowly maintain control and won via unanimous decision. Both of Berto's eyes and Guerrero's right eye were closed shut by the end of the fight.

Following an 8-month lay-off after losing to Guerrero, Berto eventually returned to the ring to face Jesus Soto Karass on July 27, 2013, at the AT&T Center in San Antonio. In a tough, entertaining back-and-forth fight, Berto lost via TKO in the twelfth round after having put Soto Karass on the canvas in the previous round. At the time of the stoppage, one judge had Berto ahead in the fight 105-103, one had him behind in the fight 103-105, and the other judge had the fight even at 104-104.