Complete set in chronological order on 16 high quality DVDs. Includes premium cases and artwork printed on the DVDs.
Orders are carefully packaged in boxes with bubble wrap and shipped out within 24 hours by priority mail (2-3 days). Guaranteed.
Our competitors sell sets in paper sleeves without cases and without artwork printed on the DVDs. They do not make their own custom menus but illegally copy our menus. Please reward the site that spends all the hard time to make these beautiful sets and not the sites that just copy our work. 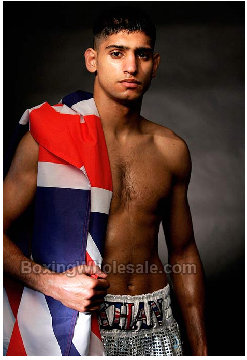 (Ratings are to compare sets on this web site only. You cannot compare ratings from one site to another because some sites are not honest and rate their sets higher than they should be.)
Price $19.95
ITEM # 330p
Price $260.00
without artwork on DVDs
with artwork on DVDs + $21
ITEM # 330

As an amateur, Khan won a silver medal in the lightweight division at the 2004 Olympics, becoming at the age of 17, Britain's youngest boxing Olympic medallist. In 2007, he was named ESPN prospect of the year.[4] He later became one of the youngest ever British professional world champions, winning the WBA title at the age of 22.

Outside of boxing, he is a philanthropist with his own charity organization, Amir Khan Foundation. He is also a promoter and sponsor, the owner of Khan Promotions and Pakistan's Amir Khan Academy, and co-owner of India's upper Fight League (MMA) and Super Boxing League. As a celebrity, he has also participated in several reality television and game shows. In 2007, Khan appeared on the seventeenth series of I'm a Celebrity...Get Me Out of Here!.

On 14 March 2009 at the MEN Arena in Manchester, Khan defeated Barrera by technical decision (TD). The fight was stopped towards the end of the fifth round due to Barrera suffering a cut in the first round, which resulted from a clash of heads. With Barrera deemed in no position to fight on by the ringside doctor, the fight then went to the scorecards, on all three of which Khan was ahead (50-44, and 50-45 twice). With victory, Khan defended his WBA International lightweight title and also won the vacant WBO Inter-Continental lightweight title.

Frank Warren was sufficiently impressed with Khan's performance to vow to land a world title fight for him before the end of the year.

There was a lot on his shoulders, but I always felt he could rise to the big occasion. I'd like to see him get a belt round his waist by the end of this year.

"I felt so completely easy, catching him with jabs. I felt like I was on a better level than him. The jabbing and patience- I felt so strong. You could see the difference. I had to take some shots in that match. I made some mistakes in the past and I'm not going to make them again."

It was announced on 8 April 2009 that Khan would move up to the light welterweight division to fight Andreas Kotelnik (21-2-1, 13 KOs) at the MEN Arena in Manchester for the WBA light-welterweight title on 18 July. Khan said, "This is the best news that I could have received .To fight for the world title in only my 22nd fight and at the age of just 22 is fantastic. Frank has done a great job getting the world title fight for me in Britain and now I have to go out and win it." This would be Kotelnik's fourth title defense. Khan won by unanimous decision (UD), 120-108, 118-111, 118-111, in front of 10,000, and became the third-youngest Brit to win a world title, at the age of 22. Khan used his hand speed and fitness to go well ahead on points in the first ten rounds. Kotelnik rallied in the closing rounds but could not land a decisive punch on Khan in spite of his best efforts. After the fight, Khan said, "It's the best feeling ever. I want to thank Freddie Roach and my team for making this happen. I'm a world champion and I'm going to enjoy it. I'm still young and I've got big things to come."