CONTACT US
HOME PAGE
TRILOGY DVDS
POKER
FREE SHIPPING
SPECIAL DVD SETS
PICK A FIGHT
BOXING SCHEDULE
PAY PER VIEW BOXING
(Ratings are to compare sets on this web site only. You cannot compare ratings from one site to another because some sites are not honest and rate their sets higher than they should be.)
Price $17.95
ITEM # 915p
Price $100.00
without artwork on DVDs
with artwork on DVDs + $14
ITEM # 915 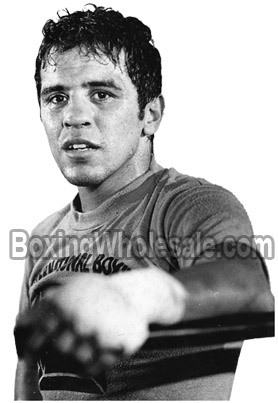 Bobby Chacon (November 28, 1951 - September 7, 2016) was an American two-time world boxing champion at Featherweight (1974) and Super Featherweight (1982). Chacon had a record of 59 wins, 7 losses and 1 draw with 47 wins coming by knockout. He held victories over seven other men who held a world title, and later avenged 5 of his 7 losses. The world champions he beat were: Ruben Olivares, Chucho Castillo, Danny Lopez, Alfredo Marcano, Rafael Limon, Cornelius Boza-Edwards and Arturo Frias.

Born in Pacoima, in the San Fernando Valley, Chacon who was of Mexican descent graduated from San Fernando High School and turned professional in 1972 while a student at California State University, Northridge, leading to the nickname "Schoolboy". He trained under Joe Ponce and won his first 19 fights, including a win against former champion Jesus Castillo. Fourteen months into his professional career, Chacon faced world champion Ruben Olivares but lost the bout when Olivares scored a ninth-round knock out. After suffering his first defeat against Olivares, Chacon won his nest four bouts, then faced off against cross-town rival and future champion Danny Lopez. Chacon outboxed Lopez and stopped him in the ninth round.

Chacon, whose good looks and charisma made him a fan favorite, had many memorable fights, including four with longtime rival Rafael "Bazooka" Limon. He was named to the International Boxing Hall of Fame in 2005.

He was "one of the most exciting fighters in the history of the West Coast," Farris told the Times, "an amazing blood-and-guts brawler who took on the best fighters in three divisions."

Chacon was a top featherweight with a maximum weight of 126 pounds when he challenged Venezuelas's Alfredo Marcano for the World Boxing Council's championship in 1974. Chacon dominated the fight and claimed the title with a ninth-round technical knockout.

He had one successful title defense but was, by his own admission, drawn to the fast life, including excessive drinking and drug use. In 1975, only 10 days before he was scheduled to defend his crown against Ruben Olivares, Chacon was 16 pounds overweight.

He managed to sweat off the extra pounds, but in his weakened state he was no match for Olivares. The fight was stopped in the second round after he was knocked down twice.

Early in his career, Chacon was known for his quickness, strong punching and command of defensive tactics. Later, as the demands of a heavy boxing schedule, he had 18 fights from 1975 to 1979, began to erode his ring skills, he became more of a toe-to-toe slugger.

His wife, the former Valorie Ginn, begged him to give up boxing, especially after devastating losses to super-featherweight champions Alexis Arguello in 1979 and Cornelius Boza-Edwards in 1981. She wanted him to find a regular job and to stay home with their three children.

In March 1982, on the eve of Chacon's fight with Salvador Ugalde, Valorie Chacon committed suicide with a rifle at the family's ranch in Northern California. Her husband went through with the fight, winning by TKO.

"She was tired of being a boxer's wife," he told the New York Times afterward. "She just wanted to be my wife, not my trainer. She was always on me about it. But boxing was something I had to do, to get out of my blood."

From 1975 to 1982, Chacon had four fierce battles with Limon, a rugged boxer from Mexico. He lost the first bout, and the second ended in a draw. In their third fight, Chacon won a split decision.

They met a fourth time in 1982 for the super-featherweight title (130 pounds), in what was ranked by Ring magazine as the fight of the year. Chacon was bloodied and was knocked down twice, but he rallied late to knock down Limon late in the 15th round and win the title by a split decision.

"I had to get it again," Chacon said after the fight. "This is dedicated to my wife, she couldn't wait for me."

A year later, he defended his crown against Boza-Edwards, in another bout that Ring called the fight of the year. He knocked down the Ugandan fighter three times to avenge an earlier loss.

The two fighters were scheduled to fight a rematch a year later, but those plans were derailed by the intricate rules of boxing's sanctioning bodies and the influence of powerful promoters, who demanded that Chacon meet another contender, Hector "Macho" Camacho. In the end, the bouts never took place, and Chacon was stripped of his title.