1-800-659-3607
Testimonials
I would like to thank you for actually having the Rocky Marciano career set I purchased today. I have looked high and low for it with no luck, until today. You guys rule and I'm spreading the word about your site. Please keep it up!!
-J. Vega
Bismark, ND
EUSEBIO PEDROZA 15 fights on 7 boxing DVDs
EUSEBIO PEDROZA 15 FIGHTS ON 7 BOXING DVDS
CONTACT US
HOME PAGE
TRILOGY DVDS
POKER
FREE SHIPPING
SPECIAL DVD SETS
PICK A FIGHT
BOXING SCHEDULE
PAY PER VIEW BOXING

(Ratings are to compare sets on this web site only. You cannot compare ratings from one site to another because some sites are not honest and rate their sets higher than they should be.)
Price $19.95
ITEM # 555p
Price $140.00
without artwork on DVDs
with artwork on DVDs + $15
ITEM # 555 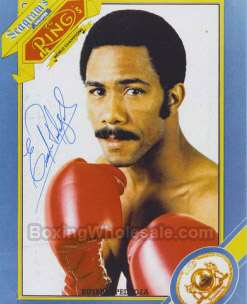 Eusebio Pedroza - who at about 5-foot-9 was tall for a featherweight - won the W.B.A title in 1978 with a 13th-round technical knockout of Cecilio Lastra in Panama City. He did not lose it until he faced the Irishman Barry McGuigan in June 1985 at Loftus Road Stadium, a soccer pitch, in London.

Eusebio Pedroza, a Panamanian boxer with a sharp jab and a reutation for dirty tactics who successfully defended the World Boxing Association featherweight title 19 times over seven years.

Pedroza fought professionally from 1973 to 1992 and fell short in his first attempt at a world title in 1976, being knocked out in two rounds by Alfonso Zamora for the WBA bantamweight title after another KO loss in his next fight, Pedroza went unbeaten in his next 26 fights, capturing the WBA featherweight title two years later in 1978 with a 13th round stoppage of Cecilio Lastra.

Among the notables he faced in title defenses were Ruben Olivares (TKO12), Juan Laporte (UD15), and Rocky Lockridge, whom he defeated the first time in a controversial split decision before winning a more convincing unanimous decision in the rematch.

Pedroza had uncommon reflexes and was capable of making opponents miss with his head movement and could uncoil his long arms to throw whip-like combinations to the head and body.

"Pedroza was one of history's best stretch-drive fighters," said The Ring's Lee Groves in a previous article about Pedroza. "Everyone knew that rounds 11 through 15 was Pedroza's turf. He seemed to draw the strength from his opponents' weakness and, once he sensed that weakness, he put the hammer down."

The night most would remember of his career was on June 8th, 1985 when Pedroza traveled to London to face "The Clones Cyclone" Barry McGuigan. McGuigan's homeland of Ireland was deeply entrenched in a period known as The Troubles, but as least on this night, the Irish stood united to cheer on McGuigan as he lifted the title from Pedroza by unanimous decision in front of 26,000 fans.

McGuigan took to Twitter to pay tribute to Pedroza, calling it a "sad day for me," and adding "it was a pleasure to share the ring with him."

Pedroza fought infrequently afterwards, coming back in Panama to lose a split decision 14 months later in 1986, then launching a short-lived comeback in 1991 before retiring for good.

Pedroza had a career record of 41-6-1 (25 knockouts) and was inducted into the International Boxing Hall of Fame in 1999.