This set comes with full professional motion menus with music, chaptered rounds, complete set in chronological order on 2 high quality DVDs. Includes premium cases and artwork printed on the DVDs.
Orders are carefully packaged in boxes with bubble wrap and shipped out within 24 hours by priority mail (2-3 days). Guaranteed.
Our competitors sell sets in paper sleeves without cases and without artwork printed on the DVDs. They do not make their own custom menus but illegally copy our menus. Please reward the site that spends all the hard time to make these beautiful sets and not the sites that just copy our work.

(Ratings are to compare sets on this web site only. You cannot compare ratings from one site to another because some sites are not honest and rate their sets higher than they should be.)
Price $14.95
ITEM # 640p
Price $60.00
without artwork on DVDs
with artwork on DVDs + $10
ITEM # 640 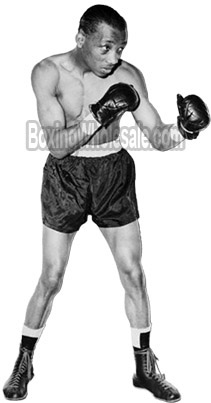 Sandy Saddler
Born in Boston Massachusetts, Saddler was, at 5’ 8.5” something of a featherweight freak who exploited his exceptionally long reach for the full. Raised in Harlem, New York, he had around 50 fights as an amateur before turning professional at the age of 17.
A dynamic puncher with both hands and an enthusiastic exponent of the left jab, Saddler was a veteran of almost 100 fights by the time of his first world title fight against Pep, a consummate ring artist who had lost just once in 136 fights. Although Saddler later claimed he fought for little more than training expenses.
Saddler began boxing professionally in 1944. He won the world featherweight championship in his first title fight, knocking out Pep in the fourth round on Oct. 29, 1948. In his first title defense, a rematch with Pep on Feb. 11, 1949, Saddler lost a 15 round decision. While awaiting another opportunity to fight Pep, Saddler claimed the vacant junior lightweight (130 pounds; also known as super featherweight) title by defeating Orlando Zulueta of Cuba in a 10 round decision on Dec. 6, 1949. (The junior lightweight title had been vacant since American Frankie Klick moved up to the lightweight division in 1934, and the division was not officially recognized again until 1959.) Saddler’s next two meetings with Pep came in featherweight championship matches, both of which Saddler won by knockout, in eight rounds on Sept. 8, 1950, and in nine rounds on Sept. 26, 1951. Both bouts were marred by fouls. In 1952 Saddler entered the U.S. Army. He did not resume his boxing career until 1954, and he did not defend his title until Feb. 25, 1955, when he outpointed American Teddy (“Red Top”) Davis in 15 rounds. Saddler’s next and last championship match was on Jan. 18, 1956, when he knocked out Gabriel (“Flash”) Elorde of the Philippines in the 13th round. Saddler relinquished his world featherweight title and retired in January 1957 because of an eye injury that he sustained in an automobile accident. He had a 162 bout record of 144 wins (103 by knockouts), 16 losses, and 2 draws. Saddler was inducted into the International Boxing Hall of Fame in 1990.

Saddler who went on to train world heavyweight champion George Foreman in the 19790s, ended his feud with Pep by boxing a one-round exhibition contest with his great adversary in 1973. By then Saddler was 47 and pep 50, but Saddler still took umbrage over the fact that Pep was introduced first.
Elected to the Hall of Fame in 1990, Saddler suffered a savage beating in a street robbery and latterly developed Alzheimer disease. His final years were spent in a nursing home; he is survived by a son, as well as his perennial foe Wellie Pep.
Joseph “Sandy” Saddler, boxer, born June 23, 1926; died September 18, 2001.