Complete set in chronological order on 7 high quality DVDs. Includes premium cases and artwork printed on the DVDs.
Orders are carefully packaged in boxes with bubble wrap and shipped out within 24 hours by priority mail (2-3 days). Guaranteed.
Our competitors sell sets in paper sleeves without cases and without artwork printed on the DVDs. They do not make their own custom menus but illegally copy our menus. Please reward the site that spends all the hard time to make these beautiful sets and not the sites that just copy our work.

(Ratings are to compare sets on this web site only. You cannot compare ratings from one site to another because some sites are not honest and rate their sets higher than they should be.)
Price $19.95
ITEM # 745p
Price $140.00
without artwork on DVDs
with artwork on DVDs + $15
ITEM # 745 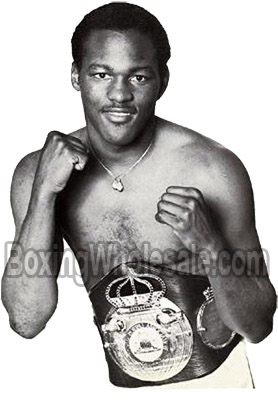 Donald Curry said he asked Leonard and Trainer for advice concerning his future, and they advised him to stay at welterweight and not to move up in weight to fight WBA light middleweight champion Mike McCallum or middleweight champion Hagler. Curry was going to face McCallum on June 23, 1986, but he decided to back out and stay at welterweight. Several weeks later, Leonard announced that he was coming out of retirement to fight Hagler.

Curry fought Mike McCallum on July 18th, 1987 for the WBA light middleweight championship. The fight was televised live on HBO. Curry tried to have Sugar Ray Leonary, who worked for HBO as a commentator, removed from the broadcast team, but HBO decided to include Leonard as part of the telecast.

McCallum, 31-0 with 28 knockouts, was boxing's longest reigning champion. Curry, a 2-1 betting favorite, boxed well and was leading on all three scorecards after four rounds. In the fifth, McCallum caught Curry on the chin with a left hook, putting down for the count. "I don't know what he hit me with," Curry said forty minutes after the fight. "I don't know what happened."

After outpointing former WBC champion Lupe Aquino, Curry got another title shot. He traveled to Italy to fight Gianfranco Rosi for the WBC light middleweight title on July 8, 1988. Curry put him down five times, and Rosi retired on his stool after the ninth round. "I trained hard for five months to win this title and it paid off," Curry said.

Curry was once again a champion, but his reign didn't last very long. He lost the title in his first defense, dropping a twelve-round unanimous decision to the lightly regarded Rene Jacquot on February 11th, 1989 in France. Curry built an early lead, but Jacquot came on in the second half of the fight. "I just got tired," curry said afterward. "I thought I was in the best condition of m life but in the seventh, eighth, and ninth rounds my legs just went." The fight that was named The Ring magazing Upset of the Year.

Following two knockout victories, Curry went back to France to fight Lineal/IBF middleweight champion Michael Nunn on October 18th, 1990. Although Curry found the target, he didn't have the power to hurt the bigger champion. Nunn dropped Curry with a flurry of unanswered punches in round ten, and the referee stopped the fight.

In his next fight, Curry returned to light middleweight to fight Terry Norris for the WBC title. The fight took place on June 1st, 1991 in Palm Springs, California. It was a rought and competitive fight for seven rounds. In the eighth, Norris put Curry down for the count with a series of right hands. Norris then hit Curry with an illegal shot whilst Curry was on his knees. Curry later retired after the fight.

In April of 1994, Curry, along with Darrell Chambers and William "Stanley" Longstreet, was indicted by a federal grand jury in Detroit on drug conspiracy charges. The ten-count indictment charged them with conspiracy to distribute cocaine, possession with intent to distribute cocaine, money laundering and being part of a continuing criminal enterprise. "My God, I don't know anything about this," Curry said, "I'm guilty by association. I've never, never ever had anything to do with drugs. I knew Stanley Longstreet and Darrell Chambers as boxers. I know nothing about any drug ring. I'm stunned."

In January of 1995, Curry was acquitted on all charges, Chambers was found guilty and Longstreet took a plea deal. "I have been systematically...lynched and then castrated by, first, the news media, and then by the criminal justice system," Curry said afterward. He also said paying for his legal defense destroyed him financially.

In March 1996, Curry was jailed for failing to pay child support. He won work release soon afterward, but that was revoked after he again failed to make support payments. He served six weeks of a six-month sentence.