Complete set in chronological order on 7 high quality DVDs. Includes premium cases and artwork printed on the DVDs.
Orders are carefully packaged in boxes with bubble wrap and shipped out within 24 hours by priority mail (2-3 days). Guaranteed.
Our competitors sell sets in paper sleeves without cases and without artwork printed on the DVDs. They do not make their own custom menus but illegally copy our menus. Please reward the site that spends all the hard time to make these beautiful sets and not the sites that just copy our work.

(Ratings are to compare sets on this web site only. You cannot compare ratings from one site to another because some sites are not honest and rate their sets higher than they should be.)
Price $19.95
ITEM # 835p
Price $140.00
without artwork on DVDs
with artwork on DVDs + $15
ITEM # 835 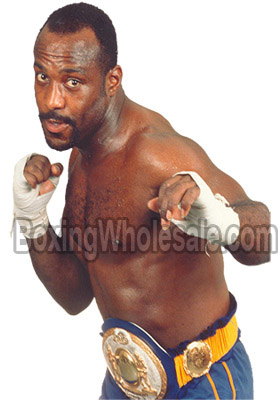 Dwight Muhammad Qawi (born Dwight Braxton; January 5, 1953) is an American former professional bxer who competed from 1978 to 1998. He was a world champion in two weight classes, having held the WBC and Ring magazine light heavyweight titles from 1981 to 1983, and the WBA cruiserweight title from 1985 to 1986. Qawi was inducted into the International Boxing Hall of Fame in 2004.

If only Dwight Qawi could have dealth with his problems outside of the ring the way he dealt with his challenges inside the ring, there's no telling the impact he could have had in the light heavyweight and cruiserweight divisions. Because of substance abuse, Qawi unraveled towards the end of his career.

It is also because of his past substance abuse problem that he is a champion of more importance, making an impact on the lives of several at-risk youths as a counselor at Lighthouse, a rehabilitation facility in Mays Landing, New Jersey.

Qawi, born Dwight Braxton on January 5, 1953, learned how to handle himself on the tough streets of Camden, NJ, where he was convicted of armed robbery at age 19. He spent more than five years in prison where he learned to meld his street fighting background with elements of the Sweet Science.

Inside prison, a fellow inmate named Malcolm Lewis taught him how to use his feet, how to move and have a good center of balance, something that proved to be very valuable to the 5-foot-6 and a half-inch brawler who came to be known as the "Camden Buzzsaw."

"I learned how to fight on the streets," Qawi told MaxBoxing.com from his home in Somers Point NJ. "I was a street fighter and boxing was always plan C for me when I got out of prison."

Qawi was 25 when he was released and with no amateur experience, he figured going to trade school was his best option. That was until fate stepped in and a man named Ike Hammonds, who saw Qawi bust people up in the streets, approached him shortly after he was released from prison.

"I was walking down the street and this guy who seen my work on the street drove by," Qawi said. "He jumped out of his car and told me I'd be a champion."

Hammonds bought Qawi his first pair of trunks, hand wraps and other equipment, and brought him to Joe Frazier's gym in Philadelphia. After only a month of working out, he had his first professional bout in 1978. Three years later he was on the threshold of greatness when he took on Mattew Saad Muhammad for the WBC light heavyweight championship.

He would win a 10-round TKO over Muhammad and convert to Islam. He would win the rematch a year later, this time via sixth round TKO.

While he considers his second fight with Muhammad his best fight he said the most intriguing round of career came in his defense against Eddie Davis.

In the tenth round Davis made a go at Qawi, forcing the champion to reassess his game plan. He knew in order to be successful, he'd have to use his stellar body punches to regain control of the bout.

"I stayed alive in that round and I had to put him on a leash," Qawi said. "I went to the body and made him follow me around the ring instead of me following him."

He would go on to lose his belt to Michael Spinks in 1983 and moved to cruiserweight, where he defeated Piet Crous for the WBA version of the title in '85. Evander Holyfield then came along and took the title with a classic 15-round slugfest one year later that the future undisputed heavyweight champ won by split decision. Holyfield dispatched Qawi in four rounds in the rematch.