1-800-659-3607
Testimonials
I got my videos. After having dealt with another fight provider I must say that your company is MUCH better. The quality is better and the time I received them in was remarkable. I'll come here from now on for all my fights. Thanks alot!
-B.P.
Amherst, OH
ARTHUR ABRAHAM 13 FIGHTS ON 5 BOXING DVDS
ARTHUR ABRAHAM 13 fights on 5 boxing DVDs
CONTACT US
HOME PAGE
TRILOGY DVDS
POKER
FREE SHIPPING
SPECIAL DVD SETS
PICK A FIGHT
BOXING SCHEDULE
PAY PER VIEW BOXING

On 10 December 2005, in Leipzip, Germany, Abraham won he vacant IBF middleweight title against Kingsley Ikeke (23-1, 13 KOs) by a 5th round knock-out. The IBF belt had previously been vacated by undisputed champion Jermain Taylor after a bout with Abraham was denied in October that year. In the fifth round Arthur met Ikeke with hard shots to the head. Ikeke began to tumble toward the canvas and Abraham landed some final rights to seal the victory.

On 23 September 2006, Abraham won a decision against undefeated contender Edison Miranda despite having his jaw broken in two places in round four. Miranda took advantage of this by fighting dirty. Miranda was docked five points for landing repeated low blows as well as intentionally head butting Abraham. However, even without the five points deducted, Abraham would have still won the fight (114-109, 115-109, 116-109). Abraham's jaw was operated on the night after the fight. He had 22 screws inserted into two titanium plates. After the Miranda bout, Arthur was praised for his ability to finish the fight despite his injury.

Abraham defeated Canadian Sebastien Demers by KO in the third round after two minutes and fifty-seven seconds. Abraham was clearly physically superior than his opponent. Arthur won his fifth title defense by defeating fellow Armenian Khoren Gevor by 11th-round knockout from a powerful left hook.

On 8 December 2007, Abraham defeated Wayne Elcock to make his sixth title defense by technical knockout in the fifth round.

During two of his matches, Abraham was accompanied by live performances of the Scorpions and is currently accompanied by the track "Ready For The Fight" by The Young Punx.

On 29 March 2008, Abraham defeated American Elvin Ayala via 12th-round KO after connecting with a devastating left hook that sent his opponent crashing into the canvas face first. This was Abraham's 7th successful title defense.

This set comes with full professional motion menus with music, chaptered rounds, complete set in chronological order on 5 high quality DVDs. Includes premium cases and artwork printed on the DVDs.
Orders are carefully packaged in boxes with bubble wrap and shipped out within 24 hours by priority mail (2-3 days). Guaranteed.
Our competitors sell sets in paper sleeves without cases and without artwork printed on the DVDs. They do not make their own custom menus but illegally copy our menus. Please reward the site that spends all the hard time to make these beautiful sets and not the sites that just copy our work.
Fights Boxing DVD 1
Arthur Abraham vs Sobot
Arthur Abraham vs Zanabria
Arthur Abraham vs Eastman
Arthur Abraham vs Parada
Price $17.95
ITEM # 155p
Price $140.00
without artwork on DVDs
with artwork on DVDs + $12
ITEM # 155 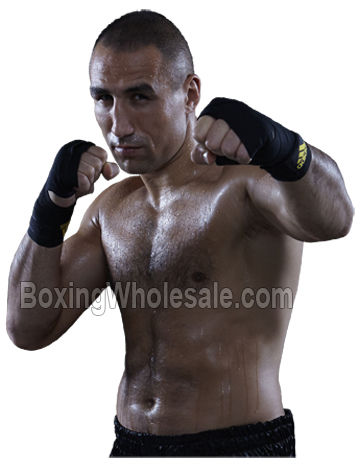 In his first match off the tournament, Abraham faced Jermain Taylor on 17 October 2009. Arthur was previously supposed to fight Taylor for the undisputed middleweight title, but the fight fell through. Abraham defeated Taylor via a devastating knockout in the 12th round. Taylor was hospitalized with a severe concussion, suffering short-term memory loss, unable to remember details of this bout. Taylor was replaced with veteran Allan Green in the tournament. After being released from the hospital, Taylor released a statement saying that he's doing just fine and wanted to congratulate Abraham on his victory and wish him well in the tournament. Former heavyweight champion Mike Tyson was in attendance and was impressed by Abraham's intensity and determination.

On 27 March 2010, Abraham fought American boxer Andre Dirrell in the second stage of the Super Six World Boxing Classic at the Joe Louis Arena in Detroit, Michigan. At the end of round 10, Dirrell was comfortably ahead 97-92, 98-91 and 97-92 on the scorecards. In round 10, Abraham knocked Dirrell down following a straight right, but the referee ruled it a slip. Abraham lost via disqualification due to hitting Dirrell after he slipped in the 11th round. Dirrell slipped after being hit on the chin near the corner. The fight was stopped at 1:13 of the round. After he slipped, Abraham landed a right hand to his chin, knocking him down and out completely. Through a translator, Abraham said, "I was not looking at his feet, I was looking at his eyes. I didn't see if he was down." After the punch, the ring immediately filled up with people including Andre's brother Anthony. Andre was taken to the hospital for a brain scan. Anthony later confirmed that his brother was alright. Abraham suffered his first defeat professionally due to the disqualification.