1-800-659-3607
Testimonials
I got my videos. After having dealt with another fight provider I must say that your company is MUCH better. The quality is better and the time I received them in was remarkable. I'll come here from now on for all my fights. Thanks alot!
-B.P.
Amherst, OH
DICK TIGER 14 FIGHTS ON 5 BOXING DVDS
DICK TIGER 14 fights on 5 boxing DVDs
CONTACT US
HOME PAGE
TRILOGY DVDS
POKER
FREE SHIPPING
SPECIAL DVD SETS
PICK A FIGHT
BOXING SCHEDULE
PAY PER VIEW BOXING

Fights Boxing DVD 1
Dick Tiger vs Zalazar
Dick Tiger vs Pickett
Dick Tiger vs Fernandez
(Ratings are to compare sets on this web site only. You cannot compare ratings from one site to another because some sites are not honest and rate their sets higher than they should be.)
Price $17.95
ITEM # 710p
Price $180.00
without artwork on DVDs
with artwork on DVDs + $12
ITEM # 710

Dick Tiger was born on 14 August 1929 in Amaigbo, a village situated within the Eastern region of what was then the British protectorate of Nigeria. He learned his formidable work ethic firstly from the rigours of tilling his fathers modestly sized farm and later as a market trader in the nearby townshiop of Aba. The decision to lace up a pair of gloves at the ripe old age of nineteen was in part due to a need to escape the drudgery of urban life and partly due to a reputation as a street fighter. he took to it like second nature, and partaking in interclub contests arranged by British military officers at a barracks on the outskirts of town. One day an Englishman sat entranced watching the short stocky fellow practically jump in the air to clobber his opponent. What tenacity he thought, almost like a tiger. "A tiger is what he is!" he shouted. Thus was born the sobriquet Dick Tiger. Nigeria had no substantive traditions in the sport but encouraged by the improving standards of organisation and the increasing accessibility of British rings to pugilists of West African origin, Tiger decided to turn professiona in the early 1950's. He cleaned up against the grandiosely named Easy Dynamite, Mighty Joe and Super Human Power. But contrary to his official fight record he would never beat the modestly named southpaw, Tommy West in all of three meetings. West died soon after their final match and Tiger, the peripatetic fighter who traversed Nigeria as part of a travelling boxing booth as well as a trader, was the main man again.

In 1955, having outgrown the local opposition, he joined the trans-Atlantic migration of fighters, arriving in the port city of Liverpool by a mailboat. Events quickly took upon a nightmareish quality. British boxing, resurgent in the immediate post war period was by now in the depths of an industry wide recession brought about in the main by a debilitating tax on sporting events. He struggled to keep warm and found the native food hard going. Adding to the problems of climate and cuisine was the need to orientate his style to British standards. He was apt to miss with ill-timed lunges and non infrequently, ran into his opponents left jabs. After four bouts and four decision losses, he went back to the drawing board and would square accounts with all four and then go on to beat amongst others future world champion Terry Downes while enroute to the British Empire middleweight championship which he ripped off Patrick McAteer.

In 1959, Tiger refusted to renew his contract with his second British manager, Tony Vairo (the first one, Peter Banasko, had dumped him after having never recovered from Hogan Basseys defection to another manager) and headed for New York to be guided by the braintrust of Wilfred 'Jersey' Jones and Lew Burston. Now approaching 30, Tiger was keen to emulate Basseys accession to the world featherweight title which owed much to their behind-the-scenes manoeuverings in getting Bassey, then largely unknown to American audiences, into the elimination series devised by the world governing authorities to find a successor to Sandy Saddler. Yet the ostensibly high powered duo, Jones was an associate editor at Ring magazing while Burston served as Madison Square Gardens International representative were unable to secure for Tiger a title challenge against either holder of the now fragmented middleweight crown. Gene Fullmer and Paul Pender were both blatent in avoiding him, the latter commenting at the time that Tiger "is one of those fighters who just keeps coming. They are the kind you don't fight unless you have to." Thus unlike Bassey, Tiger became a known and avoided quantity courtesy of N.B.C's 'Fight of the Week' broadcasts on Friday evenings. But although the age of saturation coverage by American television was in its last phase, Tiger profited as never; such that by the time he fought Henry Hank in Mark of 1962, Harry Markson, Madison Swuare Gardens Director of Boxing, describing him as a "stand out" fighter was happy to pay him a television appearance fee of $10,500, well in excess of the average payment of $4000. 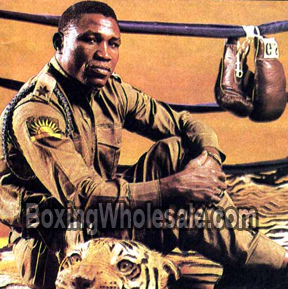 Tiger stood out in other ways. A stocky, sinewy African adorned with tribal markings on both chest and back, yet a softy-spoken British accented gentlemen partial to homborg hats and Anthony Eden coats. Bemused and occasionally irritated by asides about 'headhunters' and the cannibalism supposedly practiced on his home contingent, a favorite response was to quip that we "quit that years ago when the Governor-General made us sick." In time, American sportswriters would go past their shallow prejudices and admire him for his personal qualities, not lest of which was the quiet dignity he projected.

He was too quiet for some though. Gene Fullmer once recalled the disappointment of the promoters of their first title fight at Tiger's lack of braggadocio-a handy weapon in the quest for higher box office receipts. John Condon, the long time director of publicity at Madison Square Garden apparently loathed his tendency to introspection. According to Tommy Kenville, a Garden publicist, Tiger was at times "difficult to deal with." He would avoid pressmen and then when he spoke to them it would be shrouded in bland, "monosyllabic tones" such as "It could be a good fight..." But many of his contests were just that; good fights. Occasionally they were classic exhibitions of pugilism.